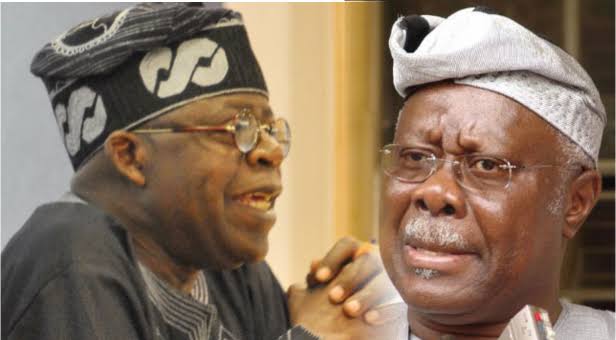 A chieftain of Nigeria’s opposition Peoples Democratic Party, Bode George, has said people who felt former Lagos Governor, Bola Ahmed Tinubu, is the best candidate to become the country’s president are “unwell and need to be checked”.

The member, PDP Board of Trustees, said he would renounce his Nigerian citizenship should Tinubu become president of the country in 2023.

George stated this on Wednesday when he featured on Arise TV’s The Morning Show.

He said this while responding to the claims by a former Nigerian Minister of Works, Adeseye Ogunlewe, of the All Progressive Congress who had said the Former Governor was the best candidate to lead the country in 2023.

George said, “When I heard Ogunlewe say Tinubu is the best presidential candidate for this country, it gets me thinking. This is because, if you go into your archives, you would have seen the vicious comments made by Ogunlewe against Bola Tinubu.

“Why can’t people be consistent? Why are you dancing like a masquerade in the market? If we take Tinubu’s tenure in Lagos – the entire eight years he spent here – and put it on a scale of one to ten, how would we judge him?
“It is not going to be more than one. We are still talking about the way he has appropriated the funds of this state. The Alpha Beta that he is still using from the treasury of Lagos State is still on.

“For God’s sake, is that the kind of man for the job? No. I am ready to debate with Ogunlewe anywhere, even in the graveyard at 3 am. He is talking absolute nonsense. The best man to be Nigeria’s president?

“I will do whatever is necessary to review and renounce my citizenship if that happens. That kind of fellow? Do you think Lagos is better off? We live here. Look at the state. No drains. Look at what they put at the bar beach.

“What about the toll gate that they paid him over N30 billion for? It is now the Lagos State Government is just coming out to say, ‘Well, we have now taken over the full control.’ What happened?

“What is going on? This is my state. We have people who are former governors. If they’d behaved like what he is doing, they’d have been nothing to him. So, to have in my head that that kind of character is nominated to be Nigeria’s president… Please, go check all of them. Something is wrong with them.”