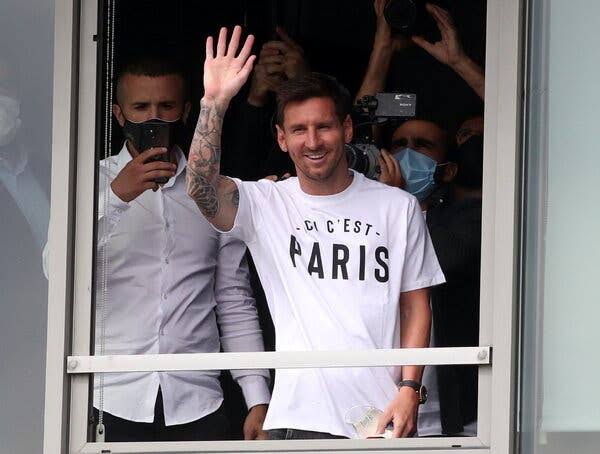 ANALYSIS: What Messi’s Signing Means To PSG And Qatar 2022

The pressure on Mauricio Pochettino as manager of PSG has just gone up a couple of notches after the capture of Lionel Messi. We will now expect PSG to not only win back the Ligue 1 title; they are nailed-on favourites to lift the 2021/22 UEFA Champions League title and any other incidental tournament they appear in.

Barring any major injury, Pochettino can name Neymar Jr, Kylian Mbappe, and Messi in the same 11 to face any opponent. The transfer market website analyses that the three players are worth a combined $410 million and in the last two seasons have scored a combined 75 league goals.

PSG can win it all

In the last two seasons, PSG have fallen at the final and semi-final stages of the Champions League. They got to the final in 2020 and could have beaten Bayern Munich if they had taken any of the gilt-edged chances they created, but they contrived to lose 1-0 to the Germans. In 2021, they met a resolute Manchester City in the semi-final and lost 4-1 on aggregate across two legs. Messi’s arrival means all of Ligue 1, Coupe de France, Trophée des Champions, and UEFA Champions League have to be attainable targets.

Last season, PSG fell short of winning a fourth consecutive Ligue 1 title, which would have been their seventh in the last nine seasons. We can argue that Neymar’s injury, which meant he made only 18 appearances, and his meagre nine goals contributed to the narrow miss. With Messi installed in their ranks, the Parisians have a three-pronged weapon to ensure they are well covered in case of injuries and mishaps.

Qatar have the greatest promotional asset for the 2022 World Cup

If there was one player image that Qatar, the 2022 FIFA World Cup, needed to convince people they are serious about football, it is Messi. With almost 400 million followers on social media platforms, the Argentine has arrived at the perfect and most opportune moment for PSG’s owners – the Qatar Sports Investment [QSI] group.

They famously spent a world record fee of $260 million to snag Neymar from Barcelona’s grasp in 2018 and the following year spent $210 million to acquire Mbappe from Monaco.

Fortunately for PSG, Messi, as a free agent, has commanded no transfer fee but insights into his contract inform the Argentine will earn about $74 million per annum, which translates to about $1.4 million a week. According to the Daily Mail, Messi “will sit in France’s highest tax bracket of 45 percent, leaving his take-home pay at around $760,000 per week.”

This summer, PSG have successfully acquired the best goalkeeper at the 2020 Euros, Gianluigi Donnarumma, on a free from AC Milan; Sergio Ramos for free from Real Madrid, and Georginio Wijnaldum, also for free from Liverpool. The stars have truly aligned in Paris as Messi also joins as a free agent. PSG did not spend a dime acquiring four world-class talents in the 2021 transfer market.

The ‘Galacticos’ have arrived in Paris

With minimal spending, PSG have successfully assembled a side that looks like a world 11. In the expected first 11, they will have 10 individual Champions league winners in Messi (4); Ramos (4); Wijnaldum (1), and Angel di Maria (1).

One stat that should automatically improve on Messi’s arrival is ‘Expected Goals’ (XG). In the 2020/21 La Liga season, Messi provided nine assists, while PSG’s XG for last season in Ligue 1 was the second-best at 82.12. They actually scored 86 goals.

Last season, Mbappe scored 31 league goals; Messi scored 35 while Neymar scored just nine in an injury-riddled campaign. If the three players manage at least 20 league goals each, they will be runaway Ligue 1 champions even though football is not mathematics.

But, which Ligue 1 defence or European team defenders will be comfortable defending against a trident of Messi, Mbappe, and Neymar (MMN)?

After his unveiling on Tuesday evening, Messi said, “Everything about the club matches my football ambitions. I know how talented the squad and the coaching staff are here. I am determined to help build something special for the club and the fans.”

Football fans can only salivate in expectation!