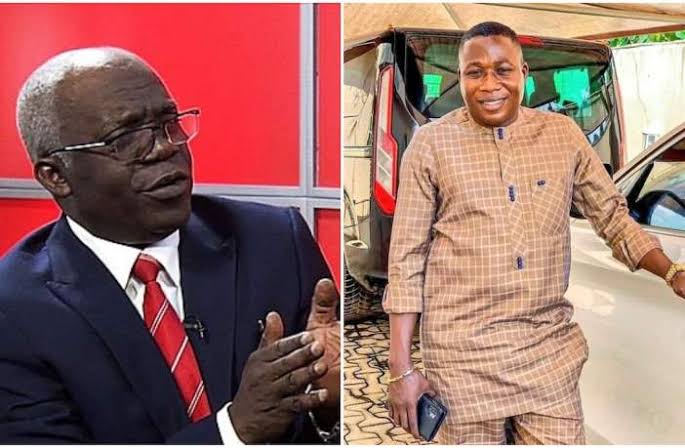 Human rights lawyer, Femi Falana (SAN), has lambasted the Federal Government for seeking the hasty extradition of Sunday Adeyemo from Benin Republic to Nigeria yet insisting that the arrest warrant issued against a Deputy Commissioner of Police, Abba Kyari, by the Federal Bureau of Investigation in the United States will follow due process.

Falana, who stated this in an interview with BBC Yoruba on Tuesday, said though the regime of the President, Major General Muhammadu Buhari (retd.), requested the hasty extradition of the Yoruba Nation agitator also known as Sunday Igboho when he was arrested in Cotonou on July 19, 2021, the government of President Patrice Talon rejected the move and insisted on following the legal procedure.

The PUNCH had earlier reported that Umar Gwandu, the Special Assistant on Media and Public Relations to Attorney General of the Federation, Abubakar Malami, said though the FBI was yet to officially write the AGF Office seeking the transfer of Kyari, everything would be done in line with the rule of law.

Kyari, the suspended former Head of the police Intelligence Response Team, is under investigation for alleged involvement in a $1.1m Internet fraud allegedly perpetrated by Abbas Ramon, popularly known as Hushpuppi, and four others.

On the other hand, the Department of State Services had declared Igboho wanted for allegedly stockpiling arms to destabilise Nigeria but the activist denied the allegation. The secret police had killed two of his aides and arrested 12 others when they raided his Ibadan residence on July 1, 2021, around 1am.

After about three weeks on the run, Igboho was arrested at an airport in Cotonou with his wife, Ropo, while they wanted to board a Germany-bound aircraft. A court in Benin Republic subsequently ordered the release of Ropo and remanded Igboho in a detention facility while investigation continued on the allegations levelled against him by the Nigerian government.

Speaking on the travails of Igboho, Falana said, “The Nigerian government asked the Benin Republic government to repatriate Sunday Igboho. In fact, we heard they had even sent an aircraft to be used to bring him down to Abuja.

“The Benin government made its Nigerian counterpart understand that the country is not lawless. They insisted on following the legal procedure and said without going to court, we can’t hand over Igboho to you.

“That was why I criticised the hasty transfer of (the leader of the proscribed Indigenous People of Biafra), Nnamdi Kanu from Kenya to Nigeria. Now, the Federal Government wants Abba Kyari to go to court before he is transferred to the United States. And this is what the government should have done in the case of Kanu.

“There are too many injustices in Nigeria and this is not good.”