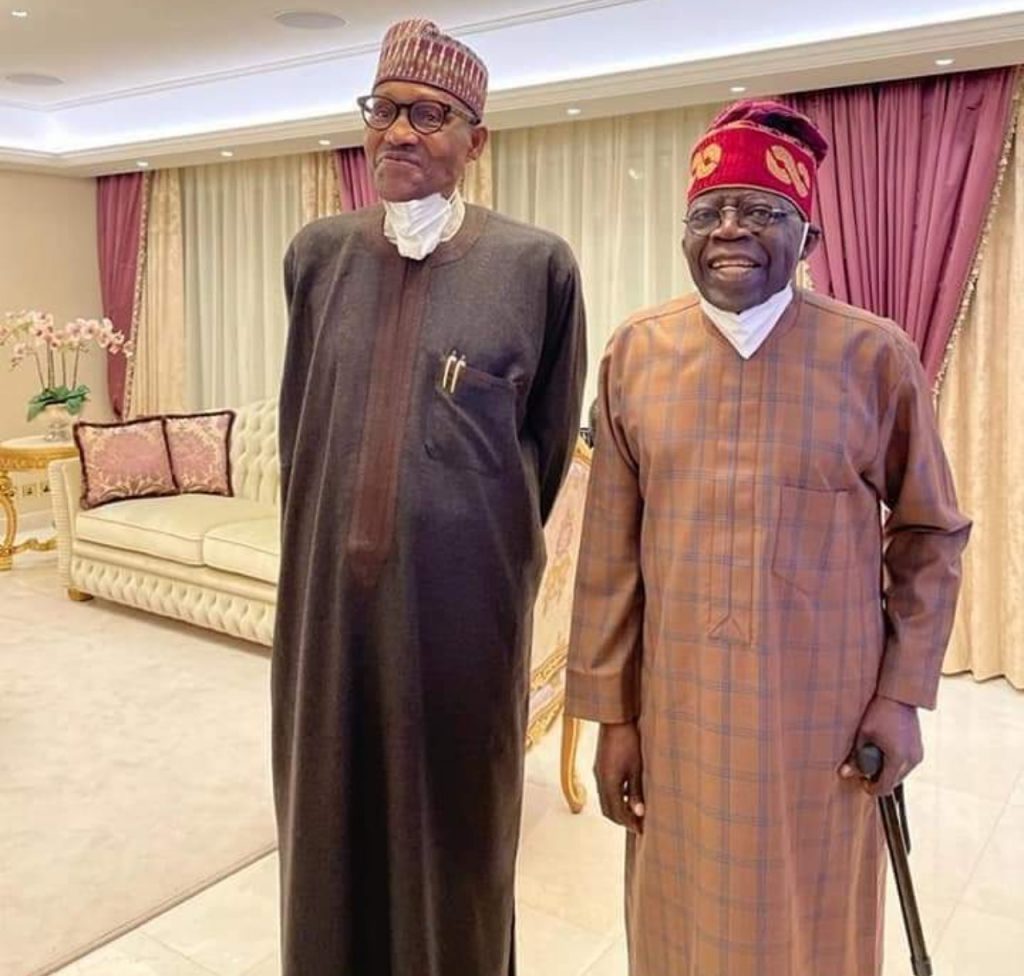 The health of Bola Tinubu, a stalwart of the ruling All Progressives Congress (APC), features prominently in discussions centred on the 2023 general elections.

Although the former Lagos Governor is yet to publicly declare intention to run, his presidential ambition is not in doubt.

After the APC formation in 2013, the initial plan was for Tinubu to run with then retired General Muhammadu Buhari. This was dropped amid admonitions against a Muslim/Muslim ticket.

The rigid opposition led to the emergence of a Law Professor, Yemi Osinbajo as the running mate.

It is not a secret that Tinubu nominated the Vice President, whom he appointed and retained as Lagos Attorney-General and Commissioner for Justice between 1999 and 2007.

Since July, the National Democratic Coalition (NADECO) co-founder has been in the United Kingdom for treatment. He reportedly underwent another surgery.

President Buhari, who himself met with his doctors after the London summit, visited Tinubu on Thursday before his flight to Nigeria.

Bearing in mind Buhari’s medical history and that of a predecessor, the late Musa Yar’adua, Nigerians are wary of another “sick leader”.

Whereas supporters of the Jagaban of Borgu say he is fine and will be fully fit in time for campaigns, opponents disagree.

They maintain that meetings, rallies, tours, among others demand physical strength, and advise the Third Republic Senator to rest and carry on as a kingmaker.

This week, a cleric, Gabriel Evans alleged that some influential Nigerians were “ganging up” against Tinubu and want him dead.

The leader of His Majesty Evangelical Ministry lamented that “personal ambition” has covered the eyes of individuals the politician made.

“They didn’t remember he was a monopolistic, undemocratic person when he selected them over others. Now, they are painting him in bad light. They are praying for his death…that he should not return to Nigeria”, Evans said.

But a vocal critic, Bode George is not impressed by arguments in favour of Tinubu. He recently declared that those backing him to succeed Buhari need to check themselves.

The People’s Democratic Party (PDP) chieftain, in an interview with Arise TV, vowed to dump his citizenship if the APC leader becomes the commander-in-chief.

George questioned how Tinubu, “has appropriated the funds of this state”, and accused him of using Alpha Beta “to siphon the treasury of Lagos”.

“For God’s sake, is that the kind of man for the job? The best man to be Nigeria’s President? I will do whatever is necessary to renounce my citizenship if that happens”, he hinted.

However, David Setonji, Chairman, Lagos House of Assembly Committee on Information and Security, credits Tinubu for advancing “the course of true federalism and constitutional development”.

In an article on why he should contest, Setonji said Tinubu “planned, plotted, co-hatched the biggest and most successful political coalition of all times in Africa – APC” and “qualifies to be called the doyen of democracy in Nigeria”.

He called the politician a “financial strategist and accomplished political administrator”, who will deliver because the country “is begging to bolt free towards its rightful place as the pride of the black race”.

The lawmaker opined that the presidential campaign would be the political death of anyone who has not got the plan, the preparation, the stamina, and fundraising capacity.

“Tinubu has extensive connections stretching across decades…It is in the interest of the South to give the opportunity to the man who not only has paid the right dues, but has the mettle and throttle to prevail at the polls.”

As the debate on Asiwaju’s ambition continues, his allies are contemplating alternatives. One of the cards, DAILY POST gathered, is for him to anoint a candidate if his vigour wanes.

With the 2023 battle set to begin from January 2022, inner circle members and support groups are waiting to hear from Tinubu on the next set of actions.

The former governor has travelled out of Nigeria thrice in the last ten months – largely on health grounds. He is expected in Nigeria before the end of August.