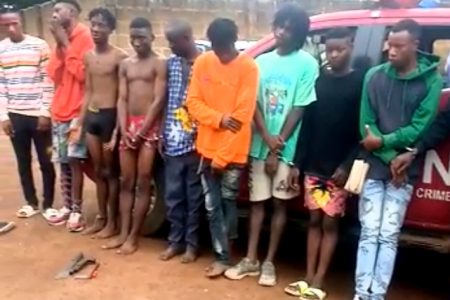 The Oyo State Security Network Agency, codenamed Amotekun on Sunday said it apprehended no fewer than 12 suspected cultists who are members of Eiye confraternity.

Accordingly to the reports gathered by thevoicesnews and also confirming by the Oyo East LG Amotekun coordinator said, “A white fully loaded MAZDA bus (YRE-91XT) conveying passengers who were reported and later confirmed to be Eiye confraternity members were in the process of attacking the house of Alhaji Owolowo.

Before they were caught in the act by the Atiba Amotekun corps with the support of the Oyo East, Oyo West Amotekun Corps and Atiba policemen.”

They have been transferred to the atiba police station.