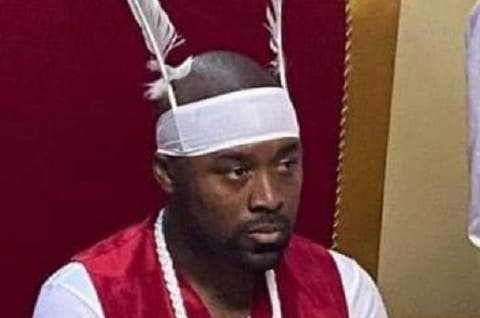 The Nigerian Police Force, Zone 5, Benin, has declared two sons of the immediate past Olu of Warri, Ogiame Ikenwoli Godfrey Emiko, wanted in connection with the missing royal crown of Itsekiri Kingdom

Nigerian Tribune gathered that the two princes, Prince Onyowoli Emiko and Prince Omatsuli Emiko, were declared wanted on the allegation that they broke into the private apartment of the Olu of Warri, where they allegedly stole the ancient crown.

The duo was declared “by the Nigeria Police Force Interpol Section, Force Criminal Investigation Department, Zone 5 Headquarters, Benin City” with a Warrants of Arrest issued against them by a Federal High Court in Benin City, Edo State.

Prince Oyowoli Emiko, in the information declaring him wanted, is said to be wanted “for the offence of breaking into the secret apartment of the HRM Olu of Warri and stealing the Royal Crown”. He is said to be “a student, Itsekiri by tribe, Aged 30 years, 5.2ft of height”, among other physical identikits.

His younger brother, the 27-year old Oamtsuli Emiko, 5.6ft in height and also a student, is wanted for the same of the offence of breaking and stealing.

The police bulletins detailing their declaration as wanted persons were issued by the AIG, Zone ‘5’ Benin City on the orders of the Inspector-General of Police, Usman Baba Alkali.

The Assistant Inspector-General of Police, Zone 5 Command of the Nigeria Police with headquarters in Benin City, Edo State, on Friday quizzed the suspended traditional Prime Minister of the Warri Kingdom in Delta State, Chief Ayiri Emami, over the alleged invasion of the palace of the Olu of Warri.

It would be recalled that following the transition of the immediate past Olu of Warri, Ogiame Ikenwoli, in December 2020, the palace was reportedly invaded and the 400-year-old crown and symbol of the Itsekiri monarchy were declared missing.

Ogiame’s passage had created a succession tussle in the kingdom, until Prince Tsola Emiko, the son of Olu Atuwatse, was eventually chosen as the Olu-elect.

The AIG Zone 5, had in a letter of invitation dated Wednesday 21st, April 2021, invited the suspended Ologbosere of Warri, Chief Ayiri Emami, for questioning over the kingship crisis in the Warri kingdom especially on the stolen Royal crow, which had resulted in high-level tension in the town.

The letter, entitled: “Police Invitation Letter. Re: case of burglary, stealing, and conduct likely to cause a breach of peace”, addressed to Emami,, also led to the interrogation another chief, Macgrey Richmond, for over two hours at the AIG zonal headquarters

Emami, however, said that he knew nothing about the invasion of the palace.

“I was invited based on the incident in Warri and it happens to be the invasion of the Olu’s palace. I told them I knew nothing about that because I was not in town when that incident happened.

“It is about that laid-down procedure, which is one of the reasons I am here and I have told the police. The police have questioned me on that issue, what led to the invasion; I have answered that and other issues I can’t divulge.

“I did not sign any undertaking, all they asked was who invaded the palace and that certain things were missing in the palace, they wanted to know the whereabouts of those things and I told them what I knew”, Emami had told journalists after his session with the police.