HomeNEWSVIDEO: Protest Erupts in Ibadan Over Alleged Killing of 15-year-old by Amotekun...
NEWS

VIDEO: Protest Erupts in Ibadan Over Alleged Killing of 15-year-old by Amotekun Operatives 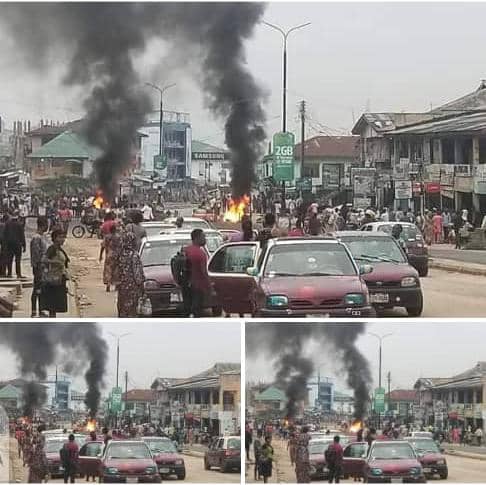 Aggrieved youths in their hundreds on Wednesday morning protested in front of the state secretariat, Agodi in Ibadan, over the alleged killing of a 15 year-old boy by an Amotekun corp.

The agrieved youths blocked all the linking roads around the secretariat main gate thereby distrupted human and vehicular movement.

The youths were seen carrying the corpse of the victim on the roof of a tricycle and calling on the state governor, Mr Seyi Makinde, to fish out the killer Amotekun corp.

The Executive Assistant on Security to Gov Makinde, Mr Sunday Odukoya, made frantic efforts to appease the agrieved youths but they insisted on seeing the governor.

All the gates leading into the state secretariat is under lock as the
protest still continue as at the time of filing this report.

The victim of the incident who was an apprentice at a private printing press at Mokola, went out on Tuesday night to buy food around Uncle Joe area where he met his untimely death.