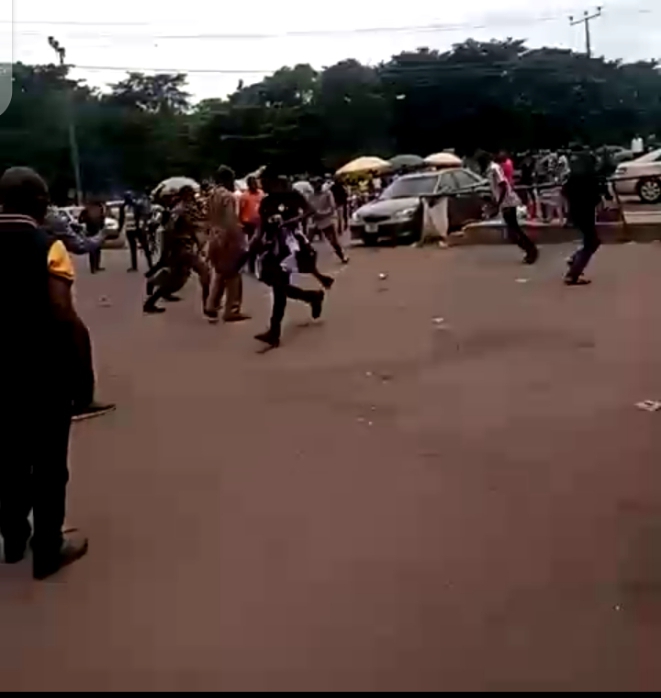 EXCLUSIVE: Inside Story Of What Transpired Between Oyo Immigration Officers And Ibadan North Local Government Chairman Agba-Egbe And Aides

After Today Splash Reports about yesterday Assault on the Executive Chairman of Ibadan North Local Government, Hon. Yusuff Sahib Oladayo And Some of his Aides by men of the Nigerian Immigration Service Operatives in Ibadan, We took it up to consult both parties to find out why? How? What really Transpired.

It was Alleged that the letter-headed papper of the Ibadan North Local Government Chairman, Hon Yusuff Sahib Oladayo were being fraudulently use by some Suspected individuals at the immigration office.

A Councillor Name withheld, National Passport was due, who then need the official confirmation of the Council Chairman, Agba-Egbe to it renewed.

Our investigation revealed that Hon. Yusuff Sahib Oladayo (Agba-Egbe) was said to have signed the official letter while also affirming it with his seal, to further show that he approved it.

On getting there, The immigration officer in-charge find out that the letter brought was approved with the Chairman official ‘seal’, the act brought doubt over the series of letter they’ve attended to in past.

The officer then refuse attending to the letter, he said the letter brought was different from the usual letter they do attend to, ‘because it bears the Chairman ‘seal’. while the letter they “immigration” were used to was identify by the chairman stamp only.

The Councillors sensed the atrocities some people have been using the name, stamp and letterhead of the Chairman to commit, now reley the information to the Chairman.

Today Splash reliably gathered that the Chairman decided to pay a visit to the office of the immigration to Confirm the veracity of the information.

on his entourage of the Chairman were his Media aide, the two Councillors from ward 8 and ward 7 respectively, his Official photographer and a vigilante personnel attached to the Chairman, are those with him to the Immigration office Toady Splash can confirm.

Today Splash reliably gathered that the Chairman and his entourage got there at exactly 1:30pm of 18/08/2021, On getting there, The chairman was said to have identified himself, why he personally introduced his Aides.

“She confirmed to me that the letter-headed papper with my stamp has been what they were accustomed with, but seeing a the ‘seal’ on the letter, made them rejected it, just to call my attention to the issue.

The Chairman according to him, thanked the immigration DG, and Promised to fish out the Perpetrators, he then came out, while waiting for the two Councillors that were been attended to, Source Added.

Getting outside of the Immigration DG’s office, the Chairman, his Media aide, and His Official photographer, A vigilante personnel attached to the Chairman where standing, while waiting for the remaining two Councillors who are been attended to inside the office.

The Chairman and his Aides were Alleged to be standing beside the authority of the Immigration Service Operatives, Named “Quatergaurd” while Making Calls, According to an insider who dont want to be named.

Immediately the Custom Officers started shouting, Hey leave there!! The Media aide to the Chairman Mr wale Bodija immediately called the attention of other members to the issue, they move one side of the area, while the photographer of the Chairman walk down to explain things to them, that they’re only waiting for their members, and the other man standing over there was the Executive Chairman of Ibadan North LGA, pleaded with them to address him with some respect as he’s the Number one citizen of Ibadan North Local Government, Source relayed to us.

Meanwhile the Chairman according to Source, reliased his boys were having a talk with some Operatives of the immigration, unaware of what’s happening, walked down to them, tried to explain to them that they’re waiting for two of their members who are inside and are being attended to, an immigration officer immediately rebuff him by attacking the Media aide to the chairman, name Wale Bodija, anger aroused and the chairman calmed things down, our sources revealed.

The photographer of the Chairman while trying to explain, and have a Healthy conversation with one of the Immigration officer, source said ” He said sir, sometimes lets try to address people in a civil manner, you might not know who is involved, let’s try to accommodate each other irrespective of our offices.

The officer was said to have been annoyed by the words from the Photographer, source said the officer immediately slapped the Photographer and asked him ” who are you to talk to us in that manner, Mr wale immediately Intervened, trying to calm nerves down, he was tapped by another officer who ask him to get out, Our Source revealed.

Mr Wale Bodija immediately bring out his ID card to identify with the officer, that he’s a journalist, the officer collected his ID card, according to him ” he ask him to return his ID card, but the immigration officer refused, why harassing us? we came here like every other person, we followed protocol, can you pls treat us in a civil way? he was quoted to have said by our source.

Today Splash gathered that Mr Wale Bodija being a Media man sensed the danger ahead brought out his phone, to have evidence of happenings, our Source said, the same officer immediately collected the phone.

In a video obtain by Today Splash, we could hear, the officer, saying i wont release this phone, unknown to the officer that the phone was on recording.

Mr wale kept following him, so he could Collect his phone, According to him, when he get to an office, an officer ordered that he should be beaten up, his wallet, power Bank, money and cloths were taken off his body, and he was left to be crying for help Mr Wake Bodija explain when our correspondent put a a call across to him, to hear his own side of the story.

Our Source added, that the vigilante personnel attached to the chairman, the Photographer where all stripped naked, beaten and locked up within the immigration cell.

The Chairman still Inside the immigration DG office, overheared one of his aides crying for help, source said; the Chairman quickly rushed out to know what was wrong, only to found out that his aides, which he left few minutes ago were already beaten blue black, Mr Wale Bodija was already beaten to stupor.

Source said; The Chairman trying to calm the situation was greeted with a thunderous slap, “What fu**king Chairman are you? we will deal with you, Next ; He was booted and was asked to site on the floor our Source added.

Source said the chairman was beaten and and was hold hostage for 3hours Within the premises of the Immigration Service.

The personal Assistant to the Chairman, who claimed he got a signal from one of the Councillors that all is not well, immediately called the police to intimate them of the alleged Assault melted on the Chairman and his aides.

Source Said, After the Intervention of the Police DPO, the chairman and his aides were released, On getting to his office the Chairman, immediately issued a directive that
no Operatives of the immigration should be allowed to park at the premises of the local government, since they the “Immigration” have decided to disrespect his Office, as the chairman.

Our Source confirmed to Us that, The information got to the immigration office, they immediately mobilized down to yo the Council Office, and started harassing everyone, deflating tires, beating anyone suspected to be with the Chairman, civil servants were not spared, source added.

The Chairman heard of the incident came out, to calm nerves down, at the presence of the police DPO he ordered that a fuganizer to pump all deflated tired, Sources said the immigration Officers seems to have recieved an order, the next thing they heard was sporadic shoots by the men of the Immigration Officers, while everyone run for safety.

A video Obtained by Today Splash, showed how violence scene were the gun shots were being fired, Many people were injured at the cause of running for safety, This Newspaper gathered that no one was hit with bullet, aside from minor injuries sustained.

A Custom officer who contacted Today Splash after our report yesterday, pleaded that his name not be revealed, in a chat he send to us reads below;

The chairman did not identify himself

While one officer was telling him ,he rebuff the instructions and other his boys to be misbehaving in our office.

This show that the chairman is a thug because he is the one that order his boys to reinforce…this is normal word, he came in to our command and wanted to step our quaterguard which is not meant for civilian to step and one of the officer told him to leave but the guy with him was shouting while the officers was annoyed that in our cammmand ground and you didn’t identify your self. Later they full in front of our cammmand wanted to destroy our place while we had so many applicants to protect their lives…later they pushed us to the wall and our commander order us and we started showing them later they ran away but for now things are still booming…the government believe in thugs

The Oyo State Assembly has promise it will intervene in the matter, Today Splash contacted the Chairman of House Committee on Human Right, Hon Adebayo Babajide Gabriel, In a brief chat with him, the Hon. said we’ve recieved a report from the Council concerning the Development that ensued yesterday, we will go through it, I can assure you that the house will delibrate on the matter next week Tuesday.

The immigration were Indicted of some activities, we will look into it, and ensure that the needful is done.

Today Splash gathered that the act of Using the chairman’s Stamp at the immigration Service has been a constanct you ⁵ behavior perpetrated, carrying out alot of shady deals, defrauding those who need the services of the immigration, for passport renewal or new passport.

The act this Newspaper also gathered was carried out by just the appendage of the Executive Chairman stamp, the chairman who has stopped stamping on Official Letters, but rather putting his “SEAL” will complicate things for the Perpetrators.

The Chairman vow to fish everyone involved in this act no matter how highly placed they are.

This is the reason for the grouse, and winch hunting tactics from both parties.