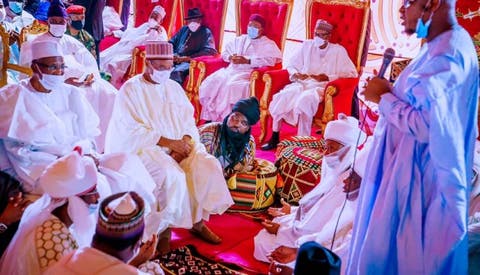 The ancient town of Bichi, Kano State, on Friday went agog as the son of President Muhammadu Buhari, Yusuf, married the daughter of the Emir of Bichi, Zahra Nasiru Ado-Bayero as many dignitaries witnessed the ceremony.

The wedding Fatiha, was conducted at the Emir’s Palace with the Minister of Communication and Digital Economy, Dr Isa Ali Pantami, presiding after payment of N500,000 as dowry.

Alhaji Aminu Dantata stood as representative of the bride, while Alhaji Mamman Daura stood for the bridegroom during the wedding.

Shortly after the religious rites, Dr Ali Pantami prayed to Allah to bless the marriage and grant the couple pious children.

Sheikh Qaribullahi Nasiru Kabara, the leader of Qadiriyya Islamic Sect in West Africa, also prayed for the couple and advised them to live in peace and harmony.

Others were ministers, members of the National and state assemblies, emirs, diplomats, politicians, well-wishers, among others.