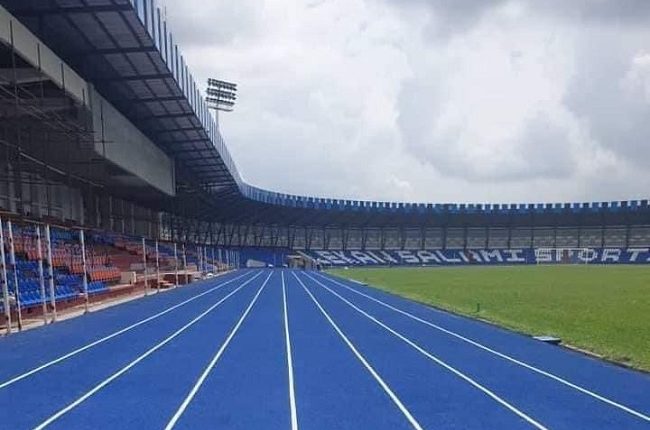 James said this on Tuesday shortly after the inspection of the facility by sports journalists saying the pitch, changing rooms, seats and many others are ready.

He spoke on some of the things that has been upgraded and remodeled in the facility.

His words: “For the mainbowl where we are right now, we are ready for commissioning. The pitch is ready. The changing rooms are ready. The seats are also ready as we can all see. So, we are set for the commissioning.”

Speaking further, He added that other sporting facilities within the complex will be fully completed by December.

“When we came in, the mainbowl where we are standing right now had an artificial turf, which is against the requirement of the FIFA. So, we are now putting in a natural turf. The spectator stand of the mainbowl also had no roof, but now, we have roof over it. The tartan track was not also there when we came in, but we now have it here.

“Before now, the mainbowl had just two changing rooms, which were not up to standard but, as we speak now, we have four large changing rooms. We have a studio and VAR room. These were not in place before.

“The indoor sports hall, administrative blocks are all being renovated. Their services were all gone but right now, their services have been put in place – windows, tiles, painting and the rest.

“We are also resurfacing the Tennis Court, Handball Court and other courts. Now, there are two new projects we are coming up with – the centre Court for Tennis, which was not in existence before. It is a new construction. We also have a composite building, which houses wrestling, boxing, kick-boxing and gymnastic. It is totally a new project. The swimming pool we met on ground was not functional. We are constructing a new swimming pool entirely.

“Talking about the swimming pool, the popular sides were not covered. It was the VIP sections that were covered. But even the covering of the VIP section have been replaced.

“Where we had the swimming pool, we are bringing five aside and a multi-purpose outdoor court, which will serve handball, basketball, volleyball. It is going to be a multipurpose court. So, the existing stand there is going to be extended and we are going to construct a new stand to serve those new games that we are putting there.

“We are making a proposal for the contractor to stay back for about a year, for maintenance during which we would have trained in-house hands that will carry on from wherever we stop after that one year.

“This project cost about N5.3billon and we are commissioning this project on September 1 and, of course, after commissioning, we may still have one or two little things to touch here and there.