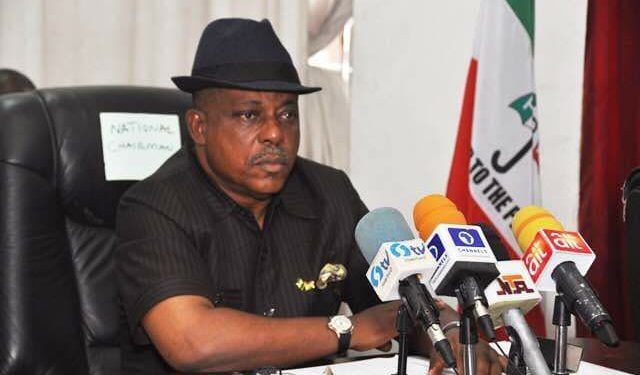 There was confusion on Tuesday as the national leadership of the Peoples Democratic Party (PDP) split into two factions.

A court in Port Harcourt had on Monday, issued an order restraining Secondus from parading himself as PDP National Chairman and taking part in any activity of the party while the order lasts.

Akinwonmi announced his assumption of office as Secondus’ replacement pending the determination of the restraining order slammed him by the court on Tuesday.

The three-paragraph statement reads: “Section 45(2) (b) of the constitution of the People’s Democratic Party empowers me to summon and preside over party meetings in the absence of the national chairman.

“Our attention was drawn yesterday evening to a court order which purports to restrain our National Chairman, Prince Uche Secondus from summoning and presiding over the meetings of the organs of the party.

“In the foregoing circumstances, as Deputy National Chairman (South) of the People’s Democratic Party, after the consultations and in exercise of the aforesaid powers, hereby deem it fit and proper to postpone the National Working Committee meeting earlier scheduled for today until further notice to allow for broader consultations in the overall interest of our party”.

As soon as the statement hit the media space, the Nazif faction hurriedly summoned a meeting of the National Working Committee (NWC) with about seven of the 18-member NWC in attendance.

It was at the meeting, held at the NWC hall at the party secretariat that Nazif pronounced himself the National Chairman, stressing that Akinwonmi, who has been battling a protracted stroke related ailment, was incapacitated and as such, could not perform the duties of national chairman.

According to him, Akinwonmi has not been attending NWC meetings and other party functions in the last nine to 10 months.

Nazif sustained his argument with Section 47 (4) of the PDP Constitution.

Declaring himself the chairman, Nazif said: “On this note, distinguished NWC members, I hereby take full charge of the Peoples Democratic Party (PDP) as Chairman in an acting capacity”.

Elaborating on Elder Akinwonmi’s indisposition, Nazif said: “We have waited this morning for the Deputy National Chairman (South) who has been incapacitated, who has not been attending NWC meeting in the last nine months and I believe there was a communication between the deputy national chairmen (south).”

Subsequently, Nazif announced that the much awaited National Executive Committee (NEC) meeting will hold on Friday, August 27, 2021 by 10am.

He added that the meeting would deliberate on matters affecting the party.

Continuing, he said: “Like you know, in the absence of the deputy chairman south, I take full charge, so I am hereby calling for an emergency NEC meeting on the 27th August, 2021, 10 am prompt to deliberate on matters affecting the party.

Akinwonmi had announced the suspension of the NWC meeting until further notice, a decision Nazif overruled.

Going by the party’s constitution, Akinwonmi, being from the same South as Secondus, is naturally the next in the line of succession to the chairmanship seat.

However, Nazif has cashed in on his ill health to assume the position.

Fielding questions from journalists shortly after the NWC meeting that he presided over, Nazif said: “Let me make this very clear that this meeting was called for 2 pm.

“As I said, the Deputy National Chairman (South) has been incapacitated and did not attend any meeting in the last nine to 10 months as far as NWC is concern.

“He (Akinwonmi) has not been in communication with any member of the NWC for the last 10 months. And like I said, this party must continue its process.

“The meeting was supposed to be presided over by the National Chairman. Unfortunately, the court order came from a competent court and stopped the chairman from acting as chairman of the party”.

The leadership crisis in the party appeared to have defied solutions despite several conciliatory moves and concessions initiated by key stakeholders to douse the rising tension.

The crisis, which reared its head a few months ago, has continued to linger with disruptive effects on the activities of the party.

The crisis was ignited by moves by some forces in the party to remove Secondus from office.

The anti Secondus campaign is believed to have been instigated by the Rivers Governor Nyesom Wike.

Akinwonmi is in Secondus’ camp while Nazif is championing Wike’s cause.

The perception in Wike’s camp is that the resolution reached by all the critical organs of the party on August 10 to have the PDP national convention brought forward from December to October, to pave way for the election of new NWC members is being resisted by Secondus.

Secondus had, before the Monday court order that suspended him from office, continued to argue that the proposed October date for the national convention was not feasible.

He had cited pending ward, local and state congresses in no fewer than seven states, a development he said, could attract litigation from the affected states if not concluded.

The ensuing litigation, he had argued, could lead to the frustration or invalidation of the outcome of the convention.

But the Wike camp has rejected Secondus’ argument, saying that it was a ploy for him to stay put in office.

Brace Up For Flash Flood, NIMET Tells Oyo, Other States