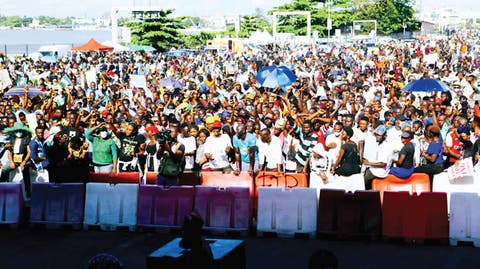 Oyo State Government is posecuting nine suspects who were alleged to be among the protesters that killed three policemen and set ablaze Ojoo Divisional Police Headquarters, Ibadan, during the #EndSARS protests last year.

The suspects, according to Newspeakonline, are being tried at the Oyo State High Court 2, Ring Road, Ibadan.

The accused, and others now at large, were also accused of setting on fire the Ojoo Divisional Police Headquarters building, thereby committed an offence contrary to and punishable under Section 443 of the Criminal Code Laws of Oyo State, Cap 38, Vol II, Laws of Oyo State, 2000.

The suspects pleaded ‘not guilty’ at the commencement of the trial on July 16.

A police officer, who was formerly attached to Ojoo Divisional Police Headquarters, ASP Ojo Waheed, on Thursday, narrated how three policemen were killed in cold blood during the October 20, 2020 #EndSARS protest in Ibadan.

While testifying at the resumed hearing of the trial, Waheed gave the names of the police officers that were killed by the suspects as James Akanmu (Inspector); Alidu Yussuf (Inspector) and Peter Abegunde (Inspector).
He added that one Sergeant Yakubu, who was shot during the protest is still receiving treatment till date

The police officer, who was the fifth prosecution witness (PW5) to testify before Justice Moshood Abbas of Oyo State High Court sitting in Ibadan, also narrated how he escaped being killed during the attack.

Waheed, who now works in Ogbomoso, said the suspects initially threw a gas cylinder into the police station, but the policemen managed to put out the fire.

He said:”I reported at the station at 6:00 HRS on that day.The DPO, CSP Adeola Odetunde (now ACP) addressed us. He (Odetunde) said there is an #EndSARS protest and we should control our anger, that one no account should we provoke the protesters. He also told us that there is a directive from the Force Headquarters in Abuja that no policeman should go outside the gate of the police station.

“After a while, some protesters came in front of the police station. They sang different songs against the police and carried different placards. Some of them were playing football in front of our station. They threw the ball inside the police station and started calling thieves. They asked us to throw the ball back to them and the station officer threw the ball back to them. They continued playing the ball until another set of protesters armed with cutlasses and iron rods arrived and started throwing stones, planks, iron rods and ice blocks into the station. Some police officers were hit by the stones, planks and irons. The Ojoo community came to persuade them to go back, that some of the property at the station belong to the community but they refused. The hoodlums later threw a gas cylinder into the station in an attempt to burn it but we managed to put out the fire at the juvenile office of the station.

“The DPO then addressed the protesters in front of the station. He told them to apply caution and conduct themselves in an orderly manner.”

Waheed further expplained that after a while, some hoodlums who rode on a motorcycle arrived and went towards Moniya.

“After about three minutes, the hoodlums who rode on the motorcycle came back and started shooting into the station. One of the bullets hit Sergeant Yakubu and the DPO tried to take him to hospital but all the access roads to the station were barricaded. All our efforts to take Yakubu to hospital proved abortive.

“Again, another set of hoodlums armed with dangerous weapons arrived at about 12:30pm. I saw Adeshina Ademuyiwa, Adekunle Moruf, Ikechukwu Eze, Adam and Olumide Oyewole, who is a rewire. Those were the ones I can identify. They were trying to pull down the entrance gate of our station but were preventing them. They moved to the old Ojoo Police Station, which is opposite the new one, and burnt it down with about 15 vehicles including patrol vehicles.

“I saw the hoodlums dragging Inspector Peter Abegunde to the front of the police station. They beat him to death with iron rods and planks. Also, they killed Inspector James Akanmu. Inspector Alidu Yussuf and I were running for our dear lives together. The hoodlums were pursuing the two of us. There is a primary school not far from the station; we were both trying to climb the school’s fence when the hoodlums catched up with us. They hit me with a plank on the leg but I jumped over the fence. Alidu too was trying to jump but he was pulled back by the hoodlums. I later found out that he was killed like the others on social media.

“Our station was burnt down. My own vehicle too, a Toyota Rave 4 SUV, 2005 model was also burnt,” he added.

Further hearing of the case has been adjourned to Friday, August 20.