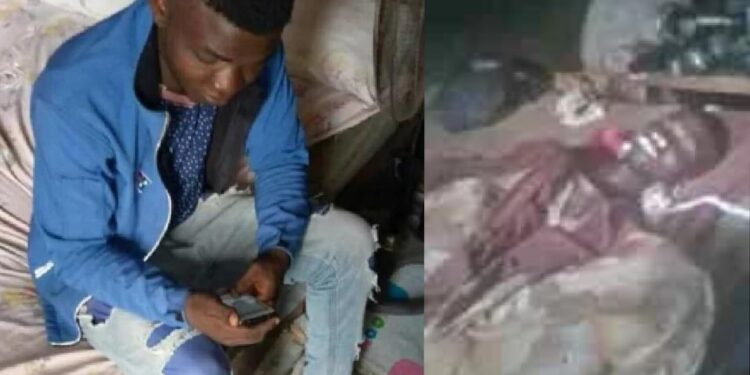 Nemesis caught up with a 23-year-old suspected yahoo boy who died after bathing with spiritual soaps.

According to Newsbreak’s report, the deceased name was Rilwanu Salami.

Investigations revealed that the late Rilwanu went to Ibadan, capital city of Oyo State, southwest Nigeria with his two friends to meet an Islamic cleric (popularly called Alfa in Yoruba language) for a spiritual bath which eventually sent him to his early grave.

Police dependable source revealed that after the bath, in the house of the cleric, Rilwanu there after went to the house of another Alfa known as Fagbemi to witness an Egungun festival.

In a statement made to the Police at SCID, Panti,Yaba Lagos, Alfa Fagbemi said: “When the deceased took his bath with the soaps, he came to my house to watch the Egungun festival. He had different brand of soaps with him. While he was relaxing, the Egungun started their display outside my house, this made Rilwanu to come out to watch the scene briefly.

“As I entered the room, he said he was feeling headache and cold I gave him paracetamol to calm down the headache, but before I knew what was happening, he could not talk again. This forced me to put a call to his father in Lagos. The father then instructed me to quickly bring his son to Lagos for proper attention. We came to Lagos in danfo bus”.

Nureni Salami, Rilwanu’s father
Narrating his own side of the story, Rilwanu;s father, Mr. Nureni Salami said that he told the Alfa to bring his son to Lagos when he was informed that his son was not feeling well, only for me to discover that the sickness was serious for him not be able to talk. I suspected foul play because my son did not tell me that he was going to Ibadan to have spiritual bath.

“He has two friends who I had ordered him not to move with but he failed to listen to me. I was not comfortable to see him moving with those friends and I had repeatedly warned him to stay away from them.

“So when Alfa Fagbemi brought him to Lagos. He tried to escape but we apprehended him and handed him over to the Police at Elere Police Station in Agege, Lagos,”My son died the second day” He said.

Meanwhile, the police at State Criminal Investigative Department (SCID) Panti, Yaba are currently investigating the case while the police are on the trail of the fleeing two friends of the late Rilwanu.

Bodija Akinwale Felicitate Mother Of Ibadan North Chairman (Agba Egbe) On Birthday Anniversary, Describes Her As An Example Of A Virtues Woman