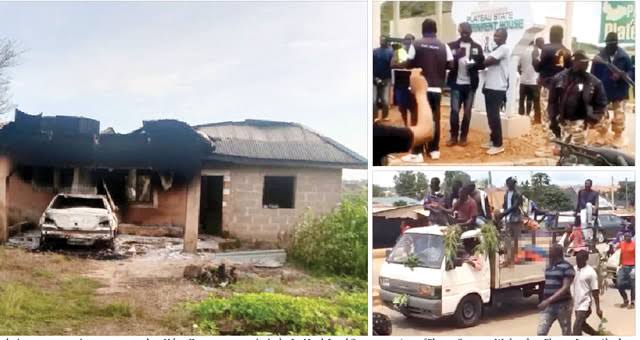 Protests on Wednesday rocked Jos, the Plateau State capital, following the killing of 36 persons in an attack on the Yelwa Zangam community in the Jos North Local Government Area of the state on Tuesday.

This was just as eight persons were allegedly killed by suspected herders in the Yelwata community, Guma Local Government Area of Benue State on Tuesday.Several people were said to have been injured and one person was allegedly abducted during the attack.

Angry youths stormed some hospitals, including the Plateau State Specialist Hospital, Jos, where they seized corpses of the victims of the attack, went round with them in a truck before depositing them at the Government House.

There was tension in the local government following the attack as youths berated the state government for failing to protect the residents.

Recall that there was tension in Jos on August 14, when a group of youths along the Rukuba Road in the Jos North Local Government Area killed 22 persons, who were among passengers of five buses being conveyed from Bauchi State to Ikare Akoko in Ondo State.

The travellers had gone back to Bauchi State for an Islamic programme and were on their way back to Ondo State when they were attacked.

On Wednesday, Jos was enveloped in tension again following the killing of 35 persons in Ahwol Ward of the Naraguta community in the same local government area the previous night.

It was learnt that around 10pm on Tuesday, gunmen stormed the Yelwa Zangam community and killed no fewer than 36 persons and injured many others, who were rushed to the Bingham University Teaching Hospital, Jos, for treatment.

It was gathered that when the gunmen got to the community, they were shooting in every direction before they went from house to house and gunned down many residents.

The paramount ruler of the Anaguta ethnic nationality in the state, Johnson Jauro, confirmed the attack to The PUNCH in Jos on Wednesday.

“I have been informed that some gunmen attacked my people last night (Tuesday) in the Naraguta community with many casualties. But we are still investigating to know what really happened,” he stated.

The Councillor for the Ahwol Ward, Yusuf Ali, who also confirmed the attack, said more than 20 persons were burnt alive in the affected area.

Another resident, Jeremiah Bulus, said, “Sixteen additional corpses have been taken to the mortuary this morning and people are still making efforts to recover more corpses from several houses, which the gunmen set ablaze. The situation is really bad for the people.”

According to the councillor, the gunmen first destroyed the iron bridge linking the community before attacking the residents, which made it difficult for security agents to access the area when they were contacted about the attack.

He said, “The gunmen were just shooting in every direction when they arrived in the community around 10pm. For now, more than 10 dead bodies have been recovered and we are still searching for more victims, because the shooting was heavy.

“While the attack was going on, the chairman of the local government called the security agents to mobilise to the area, but it was discovered that the gunmen had destroyed the iron bridge linking the community.

“They destroyed the bridge probably to prevent security agents from having access to the community so that they could execute their evil agenda unhindered and that was exactly what happened. We are in pain because our people have been cheated.”

A few hours after the attack, it was gathered that angry protesters stormed some hospitals, including the Plateau State Specialist Hospital, Jos, where the corpses of the victims were deposited.

Eyewitnesses said the protesters dragged about 15 corpses into a waiting van and marched through the state House of Assembly complex to the Little Rayfield Government House, where they deposited them in front of the two gates.

It was learnt that at the roundabout in front of the Little Rayfield Government House, the protesters destroyed Governor Simon Lalong’s giant billboard that had the inscription, ‘Peace, unity and progress’.

They were, however, prevented from entering the Government House by security operatives, who mounted roadblocks at the road leading to the gates.

The security agents also fired teargas canisters to disperse the surging protesters, but the irate youths took the corpses in the vehicle from the roundabout and made their way to the front of the Government House gate, where they dumped the corpses one after another.

One of the protesters, Yusuf Jeremiah, who said he took five of the corpses to the Government House gate, told The PUNCH that the youths were not happy with the government’s handling of the security situation in the state.

Jeremiah said, “How can we have a government in place and over 36 persons were killed in a community without anything being done to stop the attackers? What is the job of those in government if it cannot protect the lives and property of the people? Is it that those in government want to eat the bodies of those killed? If that is what they want, we have decided to bring the dead bodies to the Government House.

Another protester, who refused to give his name, said, “The killings are too much in the state. There is hardly a day without stories of attacks and killings. For how long shall we continue like this? All through the time the protest lasted in front of the Government House, no government official came out to address us. So, we left the corpses for them there.”

It was gathered that the corpses were later evacuated and taken back to the morgue by security operatives.

The spokesman for the Plateau Police Command, Ubah Ogaba, could not be reached for comments.

But the Operation Safe Haven, in a statement by its spokesman, Ishaku Takwa, said the troops mobilised to save the community were slowed down by the destruction of the link bridge by the marauders.

He stated, “The attackers came in the night and started shooting unsuspecting members of the community from house to house. The gunmen also destroyed houses and the bridge linking the town to the community, making access to the area difficult for security agencies.

“Troops of the Operation Safe Haven, who were mobilised to save the community, were slowed down by the destruction of the bridge by the marauders.

As a result of the incident, Lalong re-imposed a 24-hour curfew on the Jos North Local Government Area.

The 24-hour curfew earlier imposed on the council area alongside Jos South and Bassa by the governor was relaxed last week from dusk to dawn.

In a statement on Wednesday, the Governor’s Director of Press and Public Affairs, Government House, Macham Makut, said the decision to re-impose the curfew, which began by 4pm on Wednesday, followed imminent threat to lives and property in the area.

The statement said, “The Plateau State Government has reinstated the 24-hour curfew earlier relaxed in the Jos North Local Government Area following growing tension arising from the attack on Yelwa Zangam village of the local government, where people were killed and properties destroyed.

“According to Governor Simon Lalong, the 24-hour curfew will come into force from 4pm today, Wednesday, August 25, 2021, until further notice.

“The proactive decision became necessary following imminent threat to lives and property within the local government area and the need to forestall the breakdown of law and order. It will also enable security agencies to deploy appropriately to maintain security as the search for the attackers of the villagers continues.”

The association put the number of casualties at 40.

It said this on Wednesday in a statement signed by the Coordinator, CAN, Jos North, Rev Polycarp Gana, and Secretary, Rev Ezekiel Nyam.

The body added that four houses were burnt during the mayhem.

The statement read in part, “We reiterate and condemn aggressively these killings and attacks on innocent citizens in their homes and the provocative statements by clerics, who should be preaching understanding and solidarity to fish out the bad eggs in our communities.

“We condemn provocative statements at these times when we should be trying to assuage frayed nerves with words from the holy books, which should build rather than further tear apart.

“CAN calls on the government to visit and compensate the families of the victims affected by the incident and appeals to Christians to stand firm and defend themselves.”

10 suspects have been arrested, says Lalong

Lalong later confirmed that 10 persons had been arrested in connection with the attack.

The governor, who condemned the fresh attack in a statement by Makut, warned that those behind the killings would not go unpunished

The statement read in part, “Governor Simon Bako Lalong is appalled by yet another isolated attack, which took place at the Yelwa Zangam village of the Jos North Local Government Area on Tuesday night, where properties were destroyed and some people killed.

“The governor totally condemns this barbaric act and directs security agencies, which have already arrested 10 suspects in connection with the attack, to intensify efforts in tracking down the other assailants and their sponsors in order to bring them to justice.

Yahaya spoke at the Presidential Villa, Abuja, on Wednesday, after meeting with the Chief of Staff to the President, Prof Ibrahim Gambari