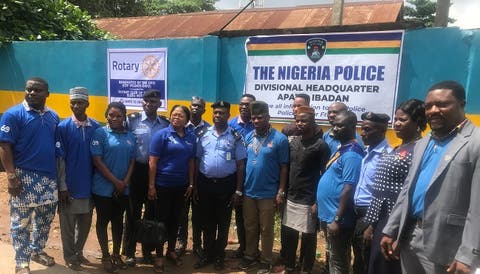 The Apata Divisional Headquarters of Oyo State Police Command received a boost from the Rotary Club of Ibadan metropolis at Elebu, in the capital city, on Wednesday, as the reconstruction and renovation of the fence surrounding the police station was commissioned.

Nigerian Tribune learnt that before the reconstruction of sides of the police station, it collapsed about 15 years ago, and had rendered it porous to hoodlums and criminals in the past.

The front part of the fence had reportedly dilapidated that the club had to renovate and paint it, to make it befitting as a security structure.

Speaking at the event, the President of Rotary Club, Elebu, Olawale Raji, said that that he knew about the condition of the fence during his visit to the Divisional Police Officer in charge of the station to do a needs assessment when he assumed office in June, to make it part of the six projects on his first 60 days in office.

According to him, our initial motive was to build traffic cubicle to enable police officers to control traffic under shades, but the DPO spoke on the need to construct a fence round the police station as most criminals were using the porous environment to escape.”

Raji said that when tabled the matter before other members of the club, it was welcomed and approved.

“We decided to look into the welfare of our police officers and today we are happy that we were able to bring that to pass,” the Rotary president stated.

In his remarks, the DPO, Apata Division, CSP Ifeanyi Owo, said that when he was posted to the station in August 2020, he only met the gate with dilapidated fence, with the side open and unprotected with constructed fence.

This, the DPO said, made people, including miscreants, to walk in and out of the premises at unholy hours.

He disclosed that he was able to put together 500 concrete blocks before the Rotary President asked for the need of the station and was told. He expressed appreciation to the Rotary Club, Elebu and its president for joining the police in partnership to renovate the dilapidated frontal part of the fence and constructed the side parts.

“Today in Nigeria, security agents and facilities they are in charge of are the targets of criminals, so it would not be in their interest if the station is porous. This (reconstruction) is a way of putting up defence for the personnel and resources in the station,” CSP Owo said.

Oyo Speaker Rt.Hon.Ogundoyin Unimpressed As He Inspects Facilities At College of Education, Lanlate