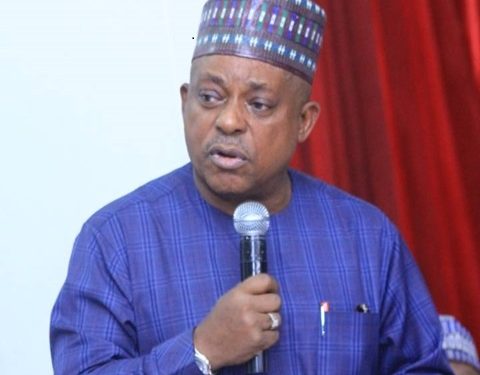 Secondus Shuts Out As Akinwonmi Presides Over PDP Caucus Meeting

The embattled National Chairman of the Peoples Democratic Party (PDP), Prince Uche Secondus, was on Friday prevented from presiding over the meeting of the party’s National Caucus.

Instead, Elder Yemi Akinwonmi presided over the meeting as Acting National Chairman.

The National Caucus is made up of members of the Board of Trustees (BoT), the National Working Committee (NWC), the PDP Governors Forum and National Assembly members.

Others include former principal officers of the National Assembly, former Governors, former Ministers and former national chairmen of the party.

Secondus arrived the party secretariat in the morning and headed straight to his office, apparently with a view to presiding over the meeting, slated to commence later in the day.

He had received Akinwonmi, who arrived the secretariat much later, and the chairman of the BoT, Senator Walid Jibrin in his office shortly before the meeting started.

Before the meeting, which was held at the NEC Hall, started, Akinwonmi announced that “a letter” was served on him the previous day, which he wanted the members to discuss before the meeting.

Akinwonmi said: “While I was still panting that the series of meetings we had yesterday were too stressful for me, a letter was served on me. I know the letter would be of importance to this meeting and I received it.

Akinwonmi made to read the content of the letter but members were not ready for it as they signaled for the meeting to commence.

At this point, some of Secondus’ aides entered the meeting venue and they were seen trying to reach out to the chairman of the PDP Governors Forum, Aminu Tambuwal, apparently to inquire if Secondus could join the meeting but they got no response.

A court in Port Harcourt, Rivers State on Monday issued an interim order restraining Secondus from parading himself as chairman and from presiding over activities of the party.

In a counter move, Secondus on Thursday obtained another court injunction from a Kebbi High Court restoring him to his seat as chairman.

Based on the Kebbi court injunction, Secondus had on Friday morning, resumed at his desk, apparently with a view to presiding over a meeting of the National Caucus.

Worried by the two court cases over the chairmanship seat, the meeting appointed an eight-member committee, with a mandate to resolve the court injunctions.

A former President of the Senate, Chief David Mark was appointed chairman of committee.

Sokoto Governor Aminu Tambuwal made this known while briefing newsmen shortly after the meeting.

Tambuwal, however, said that the party leadership had yet to be served with papers from the Kebbi court.

Answering a question, Tambuwal said: “In view of the fact that we are yet to receive that court order, we impanelled this committee (Mark committee). It is part of what this committee is going to look at, and all the parties involved accordingly”.

“This distinguished body had empaneled eight distinguished leaders of our party under the able leadership of former President of the Senate, David Mark to interface with our leaders who are involved in these issues of court so that all court matters can be withdrawn for normalcy to return to the party.

“I appeal on behalf of this body, to all well- meaning members of our party in the interest of the party, to shield their swords and let us embrace peace because Nigeria is waiting for the PDP and I believe that we have the capacity to resolve whatever issues we have internally”.

Speaking further, the Governor said the recommendations made by the leadership of the party would be submitted to the National Executive Committee (NEC) for approval at its meeting on Saturday.

He stated further that the party’s National Convention will hold from October 20-31 at a venue to be determined at the NEC meeting.

As of the time of filing this report, Akinwonmi was presiding over another meeting of the NWC as Acting Chairman.

The NWC would be coming up with recommendations on the planning committee for the October convention.

The recommendations by the NWC will be submitted to NEC for ratification on Saturday.