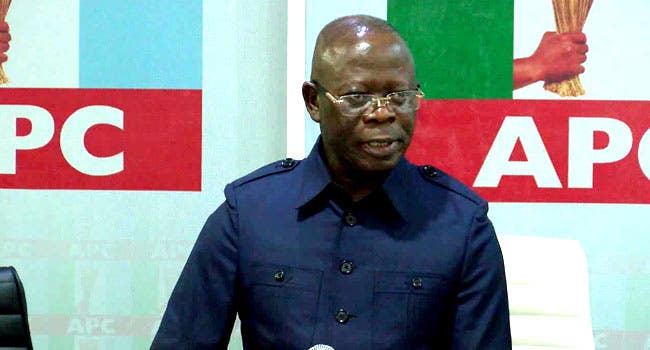 Oshiomhole: I Have Hopes, Not Fears About 2023

• Says no regrets over removal as APC Chairman

Former National Chairman of the ruling All Progressives Congress (APC), Comrade Adams Oshiomhole, has expressed hope that God will not forsake Nigeria ahead of the 2023 general elections.

Oshiomhole who also said he has no regrets over the actions that led to his removal from office as National Chairman of the APC said he has no fears about the sustenance of democracy in the country despite the numerous challenges.

The former Nigerian Labour Congress chairman who spoke with newsmen at the investiture and fund raising ceremony of the new President of the Rotary Club of Abuja, Maitama, also said he has chosen to “sleep on his rights” permanently over his removal as national chairman of the APC. He equally pledged his continued loyalty to the party .

Asked what his fears are about 2023, he said “I have hopes not fears for 2023. People like to talk about their fears but for me, my life is about hopes. I think that by 2023 God will not forsake a nation of 200 million people.

“Our democracy has come to stay. It is not perfect. A couple of things could be done to strengthen it. But we could move on and get on with the job. I strongly believe that God in his infinite power will help Nigeria to sustain democracy and guide us as we move through 2023.

“As an optimist, I always make the point that with all the problems that Nigeria has, the sub Nigeria is still much more than the sum total of all these problems.

He added that he has no regret about his action that led to his ouster as the APC chairman.

Speaking on the court judgement that dismissed his suspension from the party at the ward level leading to his removal as National Chairman, he said “the judgment quashing my removal was not actually delivered last week. It was delivered on the 2nd of July 2, 2020, about two weeks after I was removed from office.

“The only reason I decided to publish it now was because I saw comments suggesting that people were not aware that the case was dismissed.

“I had addressed newsmen shortly after my removal and said that regardless of the legality or illegality of my removal, I accepted what happened in good faith and resolved I will not contest it. I promised to remain committed, do what I can as a party member to support the party.

“You can see that I have been active since I left office because I don’t think I need to be chairman to remain relevant. I didn’t join the party to become chairman. I joined the party because we wanted to form an alternate platform capable of taking PDP out of power and that objective was achieved. It does not matter how it all went, but the important thing is that the primary purpose was not for me to be chairman.”

Addressing members of the Rotary Club of Abuja, Maitama earlier, Oshiomhole spoke of the need for the political class to emulate Rotary Club by always mobilising resources to assist those who need it most.

He said “I got to know about Rotary when I was much younger in Kaduna. I was particularly interested in the four wheel test because it seems to summarise how a society should be and how a human being should behave.”

The new President of the Rotary Club of Abuja, Maitama, Rotarian Victoria Unoarumi, informed the gathering that they intend to embark on some projects which will impact positively on the people within the Rotary year.

Some of the projects include support for mother and child health, disease prevention and treatment, basic education and literacy, peace building and conflict prevention among others.