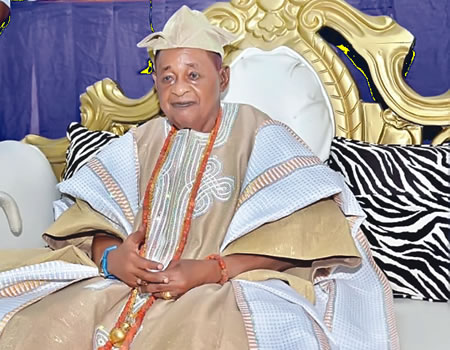 The Alaafin of Oyo, Oba Lamidi Adeyemi, on Saturday said that among all Yoruba kings, he is the only monarch who has the exclusive rights to confer chieftaincy titles that would cover the whole Yoruba land on worthy individuals.

He made this disclosure in a statement he signed at the conferment of chieftaincy titles of Atobaase and Ayedero of Yoruba land on Engineer Babajide Ademola Agunbiade and Honorable Shina Peller respectively at the weekend.

Oba Adeyemi, who described the two awardees as eligible for the titles contended that “from time immemorial, he is the king and head of the Yoruba nation. He is the only king in Yoruba land who can confer chieftaincy title on a worthy individual, man or woman, to cover the whole of Yoruba land.

“In exercise of this right, successive Alaafin of Oyo had been guided by due process in the appointment of Yorubas to chieftaincies that covers the whole of Yoruba land.

It takes a lot to be invited into Yoruba royalty and be considered for these Yoruba-wide titles. US-based Dr Babajide Agunbiade and Hon. Shina Abiola Peller are the ones getting the chieftaincy titles.”

While justifying his decision to honour the awardees, he maintained that “they are indigenes with impeccable characters. I took the decision to confer historical titles on these two prominent Oyo and proud Yoruba sons of mine because of their contributions to society and outstanding representation in their various industries and fields of endeavours.

“Agunbiade is one of the most cerebral oil and gas experts and, most especially, representing Nigeria gallantly in global oil and gas, rising to the leadership in global oil and gas. I am proud to be associated with such intellect. He’s a passionate, competent, dependable and well vast guy that goes the extra mile to make sure people around him achieve their full potentials.

“Engr. (Dr.) Agunbiade is a distinguished Yoruba son, technocrat and one of the world’s leading offshore production experts with over 20 years experience in the oil industry.”

Speaking on newly conferred Ayedero of Yoruba Land, Hon. Shina Abiola Peller, the son of Alhaja Silifat and late Professor Moshood Abola Peller, Alaafin affirmed that he had excelled in business and as a serving member of the House of Representatives.

“As I have always made known at every occasion and event such as this one, that our pride as Yoruba is in our intrinsic traditions and cultural heritage. Yoruba as a race or nation evolved a superb constitution which though unwritten, is daintily and unequivocally observed by strong convention.”

“The Yoruba chieftaincy institution is the pillar indeed, the bedrock of our system of government. A traditional ruler cannot, therefore, afford to be despotic without dire consequences. He, therefore, must rule within honourable norms of our traditions.”

One of the awardees, Dr Agunbiade stated that “history has it that the Oyo empire existed since 1300 C.E. This very empire was one the wealthiest empires in Africa. The Oyo empire is reckoned as a major source of the Yoruba ancestral heritage. You will also agree with me that the Yoruba race remains a dominant cultural force in Africa since as far back as the 11th century.”