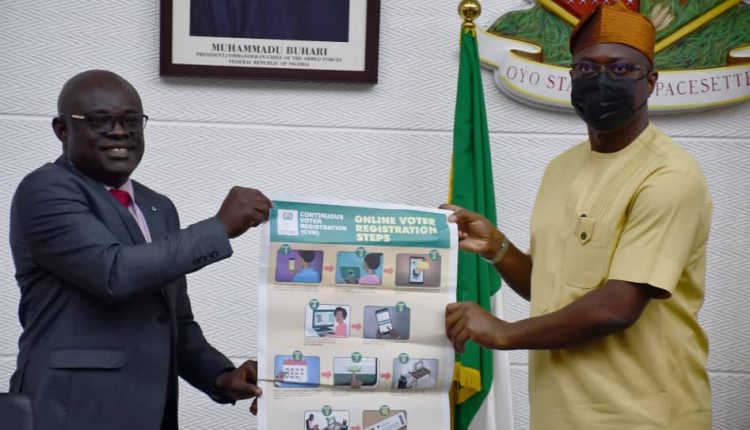 The Governor made the call on Wednesday when he received the delegation of INEC at the Executive Council Chamber, Governor’s Office, Agodi, Ibadan.

Makinde further noted that the commission is truly independent in Oyo State since the advent of the Resident Electoral Commissioner, Mutiu Agboke.

He stressed that the country has the technology which will enable INEC to transmit results which will help in curbing violence at collation centres.

In His words: “The people of Oyo State will like to put it on record that we are not afraid by the choice of the people. So, having the results transmitted from the polling unit, for us, is a minimum standard we require. So, we want to say to INEC nationally that electronic transmission of results will bring in further credibility into our electoral process. We have the technology.

“So, we believe the technology exists and INEC should be able to transmit the results as they become available. That way, people thinking they can take thugs to ward and local government collation centres will be disappointed because there won’t be anything like that. You did it successfully in Edo and Ondo states. Please, we are requesting for it.”

Speaking on the continuous voter registration, Makinde says he has mandated and supported the local government chairmen to sensitize people at the grassroots to procure the necessary gadgets to enhance improvement in the turn out of people for the exercise.

He said: “On the continuous voters registration, we have mandated our local government people, we have released funds to them to sensitise our people, and also to procure laptops and other gadgets that can allow them to assist especially those in the rural areas. So, I believe in the weeks ahead, you would see a lot of positive improvement in the number of registered voters in Oyo State.

“Finally, you can count on this government to work with you to achieve the same objectives. This is not only for the INEC but also for the people of the state and the country and for everyone watching around the world. They want to see that the process leading to an election is credible, the information is available to the people and there is nothing hidden about it. We will support in propagating those ideals and in getting the right information to the people.

“With my experience, if we give people the power to elect their leaders, those leaders will sit in those positions and know that the power did not come from few INEC officials. They will now that the power truly belong to the people and they can do the right thing for the people. That is sacrosanct and we will be your partner that will deepen the ideals of democracy in Oyo State.”

In his remarks, the Resident Electoral Commissioner in Oyo state, Mutiu Agboke said over 700,000 voter’s cards are yet to be collected at the INEC office. He added that residents in Oyo state needed more sensitization and conviction.

He noted that aside visiting the governor today, the State House of Assembly and 17 political parties would be visited on the need to sensitize their followers and members.

Why I Sacked Agriculture, Power Ministers, Redeployed Others -Buhari