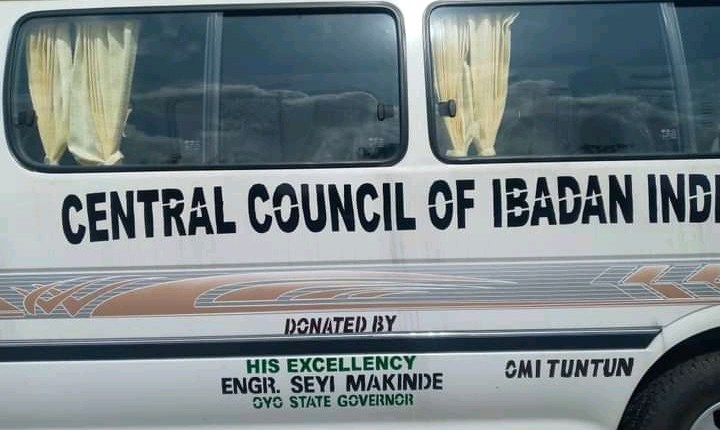 Governor ‘Seyi Makinde of Oyo State, on Wednesday, handed over an 18-seater bus to officials of the Central Council of Ibadan Indigenes (CCII), in line with his promise during the inauguration ceremony of the 2021/2023 Executive Council of the body in Ibadan last week.

The governor, who was represented by his Deputy Chief of Staff, Hon. Majeed Mogbonjubola, described the governor as a man of his words, who is ever ready to show kindness to the people of the state.

A statement by the Chief Press Secretary to the governor, Mr. Taiwo Adisa, quoted Mogbonjubola as saying that: “Like I said earlier, we basically want to thank God for this. Few days ago, His Excellency was at the investiture of the new president-general of the Central Council of Ibadan Indigenes and he promised to donate a bus. He even told the council to come to his house immediately to pick it and that is what we are doing here this morning – to hand over the bus.

“The governor is a man of his words; God has empowered him to promise and fulfil and that is what we are grateful for. This is one of the kind gestures he has been showing to the people.”

He admonished the members of CCII to continue to support the Makinde-led administration and to also propagate the good news of its achievements.

“I want to send a message not only to the CCII but to the good people of Oyo State. I am advising the members of the council to go round and proclaim the good news of this administration and make the people aware of Makinde’s generosity,” he said.

While receiving the bus on behalf of the Council, the President-General, (Prince) Oluyemisi Adeaga, expressed happiness with the donation, stating that it will help the Council to achieve its cardinal objectives of developing Ibadan and Oyo State at large.

He also prayed for the success of the present administration in Oyo State and wished the governor the sufficient grace for another term in office.

He said: “We thank governor Makinde for this gift to CCII.

“We are so happy and glad, as this will enable our mobility, which will enhance the achievement of our cardinal points. And we want to promise that these cardinal projects will have impact not only on Ibadanland but the entire people of the state.

“A man of vision that is supporting visionary leadership will forever achieve success. So, we pray for the success for the governor.”