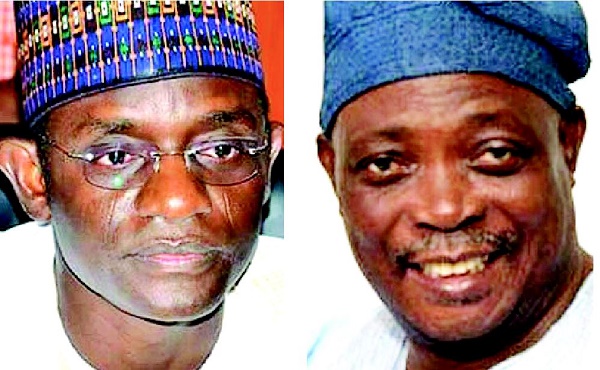 The visit of three All Progressives Congress (APC) northern governors to a former governor of Oyo State, Chief Rashidi Ladoja, in his Ibadan residence on August 15 is still a subject of discussion among politicians and watchers. It is seen as a move that may reshape both the next presidential and governorship elections in the state. The team was led by the Chairman, National Convention Planning Committee of the party, Mai Mala Buni. Others were Kebbi and Jigawa state governors Atiku Bagudu and Abubakar Badaru; a former Speaker, House of Representatives, Dimeji Bankole, and Sen. Fatai Buhari, who is representing Oyo North District. An APC chieftain, who is a staunch Ladoja’s ally Chief Sharafadeen Alli was also at the meeting.

According to reliable sources, the governors also visited a leader of the Yoruba Council of Elders (YCE) Dr Kunle Olajide, the Aare Musulumi of Yoruba land Alh. Dawud Akinola, and an elitist Muslim organisation in Southwest, MUSWEN.

They held a closed-door meeting for about one hour before departing the capital city for Akure, the Ondo State capital, it was learnt.

A source confirmed that the APC leaders discussed two broad issues: the well-being of Nigeria and the need for Ladoja to join the APC. The Nation learnt that the governors expressed concern about how Nigeria will get better through good leadership that will foster unity and offer good governance. To achieve the lofty dreams, the governors told Ladoja that his experience and track record showed that he has a role to play in making Nigeria better, even if he does not contest any election.

Another source said the governors emphasized the importance of Oyo State in Southwest and Nigerian politics at large and, therefore, requested the politician to join the train of the APC in its dream of building a better Nigeria.

It was learnt that Ladoja expressed gratitude for the recognition and the visit and bared his mind about national issues, which the country is grappling with, stressing that only good governance can solve the problems.

On the request to join the APC, Ladoja did not give an emphatic response. “He just said: ‘Your request is well noted.” The source said.

Should the former governor, who has quit partisan politics, support APC presidential and governorship candidates in the 2023 elections, the equation may change in the state. Though he has announced his retirement from partisan politics after traversing PDP, Accord and ZLP, he said the retirement would not stop him from mobilizing support for any candidate of his choice.

Ladoja is the most popular old generation politician in Oyo State today. He owes his popularity to his stand against the late Ibadan politician, Alh. Lamidi Adedibu, and his pro-workers policies while serving as governor between 2003 and 2007. Though his bold stand against alleged move to pillage state coffers by PDP stalwarts led to his illegal impeachment from office in 2006, Ladoja won the heart of the masses for sacrificing his political career for the interest of the state and by extension, the masses. His welfare for civil servants, teachers and public servants also endeared him to them to the level that he became their hero. To defeat the then perceived PDP oppressors, Ladoja also raised a new generation of leaders among the poor who never thought they could get near power and influence.

For the above reasons, Ladoja has remained very relevant in Oyo State politics till date. Members of the current generation of politicians across political parties acknowledge and accord him respect for his value and wisdom. He trains his followers to have a second address so they won’t be desperate for political positions.

For the highlighted reasons, Ladoja also pulled weight when he re-contested as governor in 2011 and 2015. Though he lost to the late Abiola Ajimobi of the APC in the two elections, his rout did no damage to his credibility as a man.

Riding on his rich profile, experience and contacts, Ladoja led the coalition that worked for the success of Governor Seyi Makinde in 2015. He brought together the governorship candidates of African Democratic Congress (ADC) Chief Olufemi Lanlehin; Zenith Labour Party (ZLP) Chief Sharafadeen Alli and Social Democratic Party (SDP) Mr Bolaji Ayorinde (SAN). They dropped their ambition and worked for Makinde in the election which helped him to defeat the APC candidate Chief Bayo Adelabu. Hence, without contesting, he pulled the string that defeated the governing APC, a feat that boosted his political relevance in the state.

Judging by his antecedents, Ladoja is unlikely to declare public support for a candidate or party early. As a statesman, he believes that it is better to open his doors to all candidates and political parties that consider him important before taking a final decision.

Should he queue behind the APC presidential candidate in the next election, the Peoples Democratic Party (PDP) is expected to shiver because political dynamics in the state today shows that neither of the two leading parties is sure of which juggernauts will still remain loyal in the 2023 elections. As for the PDP which is currently governing the state, its chances look brighter going by the pro-civil servant policies of the Governor Seyi Makinde’s administration. Besides, his populist approach to governance still sits well with many people. Power of incumbency will help in many ways.

The APC has good chances in the state in the next election if only they are able to unite and produce an electable governorship candidate. But that is a Herculean task for the party which is peopled with centrifugal forces that are working hard to outwit one another in the scramble for the soul of the party. With 12 out of 14 House of Representatives members, two out of three senators and governing at the federal level, APC is able to stage a come-back if it succeeds in crossing the rubicon.

But, the Ladoja factor can not be wished away because of the weight he can pull for whichever party or candidate of his choice. As experienced in 2019, Ladoja can conveniently coordinate a coalition to win an election in this era where most politicians believe that being in power is the only gain of being a politician. This is why they move to political parties where they believe their chances are brighter. Those who remain can also work against their party as long as they believe they they are not patronised. In summary, coalition of open and secret fellows are easy to form these days particularly when a figure such as Ladoja is on the terrain.

Historically, coalitions have been used as a weapon to defeat governing parties and candidates in Oyo State governorship elections in the Fourth Republic. A coalition of PDP and internal opposition within the defunct Alliance for Democracy (AD) defeated the late Lam Adesina in 2003. Ladoja was the beneficiary. Those who believed that their interest was not served in the AD coalesced with the PDP to truncate Adesina’s hope for a second term.

The same repeated itself in 2011 when internal opposition within the PDP coalesced albeit secretly, with the then Action Congress of Nigeria (ACN) to thwart the second term ambition of former governor Adebayo Alao-Akala. The latter is the APC leader in Oyo State today having defected in 2015 and 2019.

Ladoja facilitated a repeat of the same in the 2019 election with Makinde as the beneficiary.

On the presidential election, Ladoja’s support for the APC may also be meaningful as the party lost by 1,000 votes to the PDP in the 2019 election. Given the fact that it is the governing party in the state today, PDP sure has potentials to win in Oyo State in the 2023 election. But, Ladoja’s support is capable of altering the equation if he is able to galvanize a new coalition based on his conviction.

The PDP in the state said the governors’ visit to Ladoja was not a source of worry. Its State Publicity Secretary, Mr Akeem Olatunji said: “ Chief Ladoja is an elder statesman, any political party or individual can visit him. Our national chairman or APGA can visit him tomorrow. He is expected to be open to everybody as an elder statesman irrespective of party affiliation since he is no longer carrying the card of any political party.

“Governor Seyi Makinde is performing excellently and Chief Ladoja is happy with that. So, we have no reason to be disturbed about the visit.”

Commenting on the move, a political scientist and former political adviser to the late Ajimobi, Dr Gbade Ojo, chided the party for trying to court every weighty politician irrespective of party affiliation. He said the move was bad for democracy and ideological politics.

His words: “The visit of APC big shots to woo Sen. Rashidi Ladoja into the progressives camp is, no doubt, a welcome development to the party but a bad omen to the nascent democracy. Ladoja, as a former governor, is known to have a strong political structure across the state but not a progressive element, anyway. A party that courts every politicians irrespective of ideological leaning is not a catalyst for democratic sustenance. This was how the likes of Bukola Saraki and Aminu Tambuwa among others were brought in and rocked the boat and left. A party should distinguish itself with its ideology which is lacking in APC now.

“For Oyo State, the old rivalry and political rancour between Ladoja and Akala makes the scenario interesting by the time Ladoja with his disciples move in fully. The concomitant effect is that the party may win election in the future, but governance becomes practically difficult in an attempt by the new governor to satisfy all political hawks and vampires. The current experience of Governor Seyi Makinde may be a child’s play. At national level, Nigerian politics is gradually depicting a choiceless democracy as a result of manifest one-party state in the offing.”