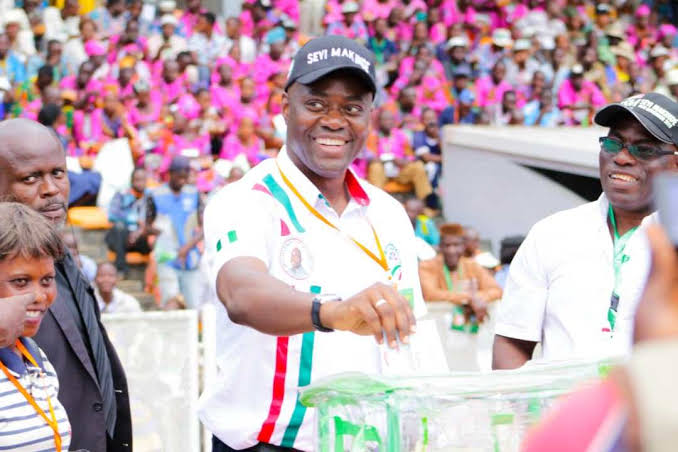 Re-Ibadan North PDP Stakeholders Accuse Makinde Of Imposition — You Met Us When You Returned From SDP, “An Urterior Motive of Delusional Shenanigans Politicians”— IBP

A foremost group called the Ibadan North Patriot (IBP) has react to a malicious publication by one Alagbe Gbemileke, who claimed to be a Stakeholder of The People’s Democratic party (PDP) in Ibadan North.

The group frown at the claims that the Oyo State Governor Engr Seyi Makinde plans to impose Candidates on wards accross the State, and the inability of the state honorables to embark on projects across their respective Constituencies was as a result of Makinde’s high-handedness and Failure to release money to the Members of the Oyo State house of Assembly.

In a statement release on Monday in Ibadan by it chairman Mr Segun Adeyinka and co-signed by its secretary Mr. Idris Adewale made available to TODAY SPLASH reads…

It’s a shame that someone who claim to be a member of PDP and also from Ibadan North local government is berieve of the happenings in their Constituency.

We learnt that the faceless, and uniformed Mr Alagbe Gbemileke is from ward 11 of Ibadan North Local government, and as such we will like to educate, and serve him with the information he has failed to lend his deaf ears to.

A member of the Oyo State house of Assembly from your Constituency Honorable Adebayo Babajide Gabriel has been one of the shining lights among other politicians, but since you claim not to have seen the many things this young man has done we will avail you with all the necessary information needed.

Mr Alagbe Gbemileke in a release he made could not mention a single stakeholder who was present at the delusional meeting he claimed to have held, this shows that the acclaimed banker has lost grips of the happenings and reality within his sorroundings.

We advice Mr Alagbe Gbemileke to go back to his banking job and leave politics, as it’s evidently clear that he knows nothing about his immediate environmemt let alone, having the knowledge as how party politics is been played, those behind these urterior motives are saboteurs who have failed in all spheres of life, and are playing the pull them down game.

We as Ibadan North Patriots, call on all stakeholders to ignore these set of faceless mask men, rejected Shenanigans politicians hiding under delusional urterior motives, after they’ve been rejected.

The Statement further stated that the Ibadan North People’s Democratic Party (PDP) is one and indivisible, those paddling embers of discord should desist or face suspension form the party.

Governor Seyi Makinde is our leader and a respecter of law, the party is saddle with the responsibility of party affairs, while Makinde has been busy engineering the State to an enviable position, that has catch national and international attention, making Oyo State economically State Over the last two years, the statement Reads…