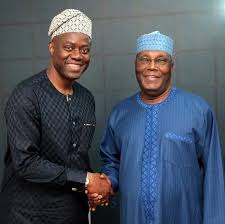 REVEALED: How Atiku And Seyi Makinde Gange Up Against Wike To Stop His Candidate From Emerging Next PDP Chairman

The battle for supremacy ahead of the October national convention of the PDP is becoming interesting as top party members are fighting to ensure that their candidate emerges the next national chairman of the PDP.

There have been alignments and realignments in the last few days as the October national convention of the PDP is less than 6 weeks from now.

Rivers State Governor, Nyesom Wike plans to have his way again in the party but top party members like Governor Seyi Makinde, former Vice President, Atiku Abubakar and former Governor of Niger State, Babangida Aliyu are out to checkmate him.

According to Thisday newspaper, former Vice President, Atiku Abubakar and Governor of Oyo State, Seyi Makinde are ganging up against Wike to stop his candidate from emerging the next national chairman of the PDP.

We will be discussing that in this article.

How is Atiku and Seyi Makinde ganging up against Wike to stop his candidate from emerging as the next PDP national chairman?
All the development in the PDP in recent times point to the fact that top party members don’t want Wike to dictate for the party again even though he is a major financier of the PDP.

Wike had an initial agreement with Seyi Makinde that they should support Oyinlola to emerge as the next PDP Chairman at least to allow South-West to produce the PDP national chairman for the first time.

Wike changed his mind a few days ago realising that Oyinlola will likely take instructions from Obasanjo and Babangida Aliyu who appear to be backing him.

Atiku Abubukar who wants Jegede to emerge upon noticing that Makinde is now in support of Jegede held a meeting with him a few days ago and both are teaming up to stop Wike’s candidate Dan Orbih from emerging the next PDP Chairman.

Why are Atiku and Makinde interested in Jegede’s emergence?

His emergence will make it easy for him to grab the 2023 presidential ticket of the PDP. Makinde is a political associate of Jegede.

Recall he led his campaign in the 2020 Ondo guber election. Also, he wants a South-West politician to head the NWC of the PDP for the next four years.

An idea many have said will boost the chances of the party in the Osun and Ekiti elections that will take place before the 2023 presidential election.