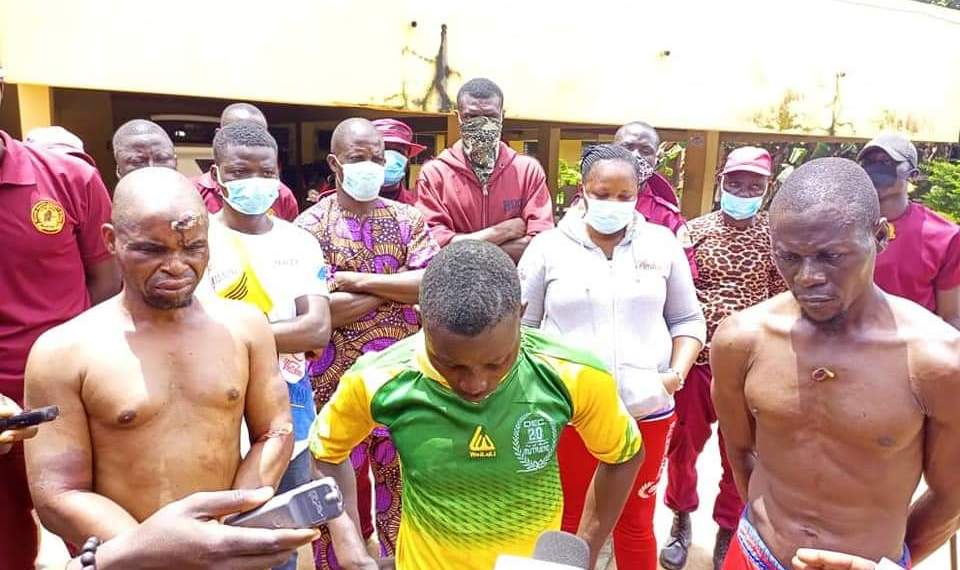 Three men suspected to be ritualists have been arrested with human parts of a 73-year old man named Adebisi Samuel, by the Oyo State Security Network codenamed Operation Amotekun.

The suspects who were identified as Muhideen, Abdulrasheed Olanrewaju and Ismail Muraina, were arrested around Boluwaji area of Ibadan after burying the body of Olaniyi, which had already been butchered by the suspects in a shallow grave.

One of the suspects, Muhideen, a 27-year old, said his land lady had discovered the dead body at one side of her compound after which she raised an alarm.

He said one of the suspects, Abdulrasheed Olanrewaju had paid a sum of N35,000 to Ismail Muraina to help him get a human head for money ritual.

Muhideen disclosed that he had to deploy a diabolic means to capture their victim, claiming that the victim was a mad man who was roaming the streets.

He said it was Alfa Salam Salam that contacted him that one Abdulrasheed Olanrewaju needed a human head for rituals.

He proceeded to one Baba Ibeji at Bode market who also deals in selling human parts, but he couldn’t get the head from Baba Ibeji because of price.

This, according to him, made him to use charm to kidnap a man he claimed to be mentally derailed along Amuloko – Akanran road.

He then took the man to his house located at Boluwaji along Lagos Ibadan expressway, where he and the other suspects later slaughtered the victim.

While answering questions on how they got apprehended, Muhideen said, after they had slaughtered the man and remove his head, the remains were buried in a shallow grave at the backyard of the house he was living.

It was the landlady who later discovered that a portion of her backyard was dug and she requested to know what was buried there.

Muhideen said while he was trying to exhume the body, the landlady has contacted the other landlords in the neighbourhood, who later reported to the Amotekun Corps.

Abdulrasheed Olanrewaju and Ismail Muraina the other two suspects who also confessed to the crime said they assisted Muhideen in slaughtering their victim.

Meanwhile, daughter of the victim Olufunke Adeosun said, Muhideen is a member of their family who had lured her father to his house with the claim that he wanted to pay him a sum of N150,000 for a land that he (Muhideen) had sold.

She identified her father as Adebisi Samuel and demanded justice from relevant authorities.

The deputy commandant of the Oyo State command of Amotekun, Akinro Kazeem said, the case will be further investigated by relevant security agencies.

He said: “We heard a report about some suspected ritualists yesterday evening. We started the investigation and we arrested the first suspect in his house who later took us to the other suspects.”

“The suspects confirmed that they kidnapped a man along Amuloko – Akanran road, slaughtered him and removed his head.”

“The head was then given to one Adbulrasheed Olanrewaju who needs it for rituals. We apprehended the Abdulrasheed but he had already burnt the head to ashes.”

Kazeem said one of the suspects, Olalekan Akande Aka Ogunpo confessed that he used charm to kidnap the victim.

“We are still investigating and once we’re done with our own investigation, we shall hand the case over to the police afterward.”