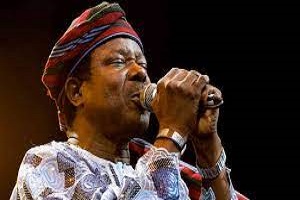 Juju legend King Sunday ‘Sunny Ade’ Adegeye might not be celebrating his 74th birthday tomorrow following the death of one of his wives, Hon Risikat Adegeye.

The late Risikat Adegeye, an ex-member of the Lagos House of Assembly, died in the early hours of Tuesday.

The Nation reliably gathered that friends and family members of the famous musician have been thrown into mourning over the incident.

However the circumstances surrounding the late Adegeye’s death were still sketchy.

The deceased was a two-time member of the Assembly Service Commission.

KSA was yet to release a statement as at the time of filing this report.

I’ll Still Perform If You Take Me Away From PDP, Wike...