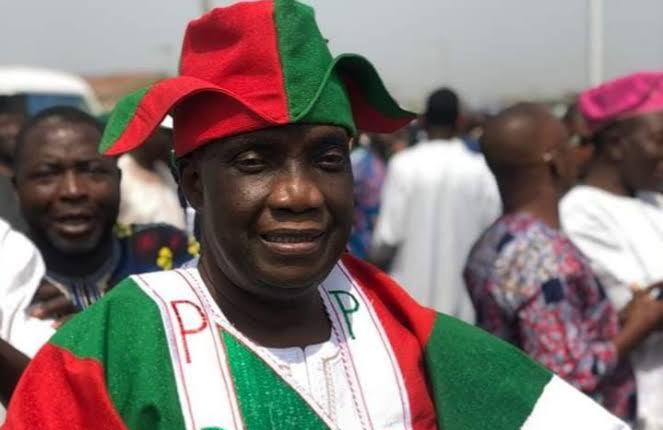 FORMER Minister for Mines and Steel and a chieftain of the Peoples Democratic Party, PDP, Elder Wole Oyelese has described the agitation of the party aggrieved leaders in the state as a joke and childish, urged them to return to governor Makinde before it too late.

Elder Oyelese in a press release made available to westerndailynews on Thursday evening said the group accusing governor Makinde of scheming to take the structure of the party should not be something to worry about, as party structure is already solidly with him except where someone is fooling somebody that he has a magic to perform come 2023.

He also pointed that, the aggrieved leaders are just using media to hype the situation within the Oyo PDP as there is  no much to worry about in the party.

ABANDON YOUR BICKERING AND COME BACK HOME;

Much as I had thought I would not have to address the aggrieved  group again before they  get the message  and do what is right, events of the past day or two have made me to change this stand.  A decent first reaction to the display at the Jogor centre was to regard it all as childish tantrums  and thus ignore it.  However the paid advert addressed to the National Working Committee and other echelons of our party at the national level needs to be addressed not so much for content or depth which it lacks, but so that no one is deceived.

One thing that stands out so clearly in the message and which gladens my heart is that  no one has accused  Governor  Seyi Makinde of not performing. This singular observation despite the obvious but needless bitterness exhibited by the group should make all party loyalists and even the Governor himself  proud of himself and  our great party.  The aggrieved group themselves should be  proud of their  Governor.

May I at this stage advise that in future  the aggrieved group and any other group or persons who may have an axe to grind do not  throw caution to the wind in theway the person of the Governor is addressed. Let us as a people always remember  the wise counsel of our elders that a person  should never sell his relation cheaply as a fortune  may not be sufficient to  reclaim  him later.  There is no need to disparage people to get what you want.  Anger or frustration should not be an   excuse for doing or saying untoward things. The members of

the group themselves  know that  those statements they made are not true.  It is a case of calling a dog a bad name simply to hang it.

Reading through the group’s message, it is quite clear that several euphemisms  have been used to describe  the same problem thus making it appear as if there is an hydra-headed problem  in Oyo PDP whereas there is  no such thing.

The group accuses the Governor of purchasing  nomination forms for  everyone  when they cannot deny the  fact that someone who says he wants to be governor also procured forms for the aggrieved group.  By the way, this is possible because Governor   Makinde waved  aside his special privilege which the party offered all sitting  Governors  so no one can accuse him of  anything in Oyo state. The insinuation that PDP is  OMITUNTUN is mere hog wash. I don’t  know the percentage of party men who belong to OMITUNTUN which in any case is a voluntary group  the Governor  formed some fourteen  years ago and has never been a criteria for anything  I know of.   I don’t belong to OMITUNTUN and I know several leaders don’t, but are the people in that group not staunch members of the PDP?    OMITUNTUN definitely is not the  issue.

I don’t  know since when a Local Organising  Committee for any event at all became a new thing. We are all used to LOC as the body that prepares the ground for the people coming to make things work at an event or on a project.  The LOC will definitely not be involved in the real  exercise, so what is the noise all about except for fear of failure.  The   aforementioned  are some of the issues raised but  which are really no issues or at least not the real issue.

I want to appeal to the aggrieved group to stop ridiculing their party and giving her a bad name by spreading damaging lies  because of demand  for patronage.  There is no iota of truth in the story of Oyo state being a killing field during the last local government  elections and these people know it.  There should indeed  be a limit to political rascality if that is one.

The group accuses the Governor of marginalisation

and maltreatment.  Those words are euphemisms for chop, stomach  or pocket empowerment. Talking about some people reaping where they have not sown is just another way  of demanding for  unfettered access to His Excellency hoping it will make them have more of the pie.

Then the aggrieved group  came with the greatest fake news of the year of the possibility of our serious-minded Governor  joining the APC.  With the enormity of the task of uniting and delivering the South West to the PDP,  where is the idea  of switching party coming from?  In fact this suggestion alone proves me right that the whole agitation is a joke and the main issue is what the Governor  has already promised  and which I believe he will soon deliver.

I therefore appeal to all well meaning members of the party to exercise a little patience  for the Governor  to deliver.

I call on the aggrieved  people to stop all bickering  and come back home to join their  compatriots. No one should be fooled in to the ridicule of a parallel congress. Those desperate about parallel  congress have their hidden  agenda which must not be allowed to fly.  It is not too late to do the right thing by  supporting this forward looking administration.

I call on the national leadership of our party to disregard the content of the paid advert which is actually  a means by the sponsors to arm twist  the Governor. The leadership should instead give Governor  Seyi Makinde all the support he needs to surmount  the enormous task of delivering the south west to our great party.

The PDP is one united family  in Oyo state which will come out stronger in the months ahead.