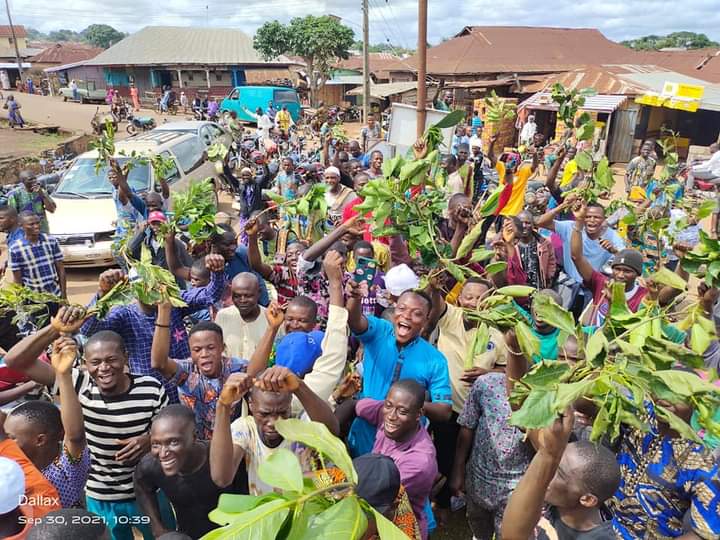 Angry protesters on Thursday took to the major streets of Okeho, the headquarter of Kajola Local Government in Oyo State to register their grievances on the total darkness being experienced in the town for some months now.

They called the Ibadan Electricity Distribution Company (IBEDC) to right all wrongs now by restoring their power supply with immediate effect or its office remained shut down until further notice.

The protesters who mobilised as early as 9.00 a.m marched round the town and later to the office of IBEDC located at Isia, beside C& S Church to frown at what they described as “I don’t care attitude” of IBEDC towards providing them electric power supply.

The embittered protesters who were mainly youths also alleged that the authorities of IBEDC had collected money meant for pre-paid metres from them since 2015 but the metres paid for are yet to be supplied to them till now.

Armed with placards with different inscriptions that read: “IBEDC officials are fraudsters in Okeho”, “IBEDC staff are extorting money from its customers”, “IBEDC has left us in total darkness for the past few months”, Akeem must go”, “We are tired of paying for darkness”, “IBEDC is giving us epileptic power supply in Okeho”, “IBEDC, stop distributing crazy bills to our people”, “Akeem enough is enough, it’s time to go”, amongst others described the development as callous inhumane and wicked.

Speaking through the Youth Leader, Okeho Youths Development Foundation, Mr. Waheed Aranni who led them said, the youths are calling on the concerned authorities to act speedily to the plights of our people to avoid the wrath of inhabitants of the town.

The leader also said the development has given chance to evil perpetrators to unleash terror on innocent citizens of the town and even stealing cables and other public properties.

As at the time of filing this report, efforts made to reach out to IBEDC Manager or one of the members of staff to get their reactions proved abortive.