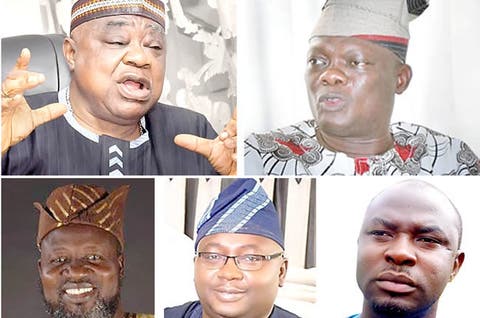 More groups of members of the All Progressives Congress (APC) in Oyo State have rejected the setting up of a zoning committee for the forthcoming state congress of the party by the former governor Adebayo Alao-Akala led Elders Advisory Council.

Toeing the line of the Unity Forum in rejecting the zoning committee were the Bayo Adelabu group, Joseph Tegbe group, Zenith Labour Party, Niyi Akintola group which jointly issued a communiqué on Thursday.

The communiqué signed by representatives of the groups and released by Alhaji Abu Gbadamosi said the constitution of the committee on zoning by the “so-called Advisory committee” is alien to the constitution and practice of the APC.

‌
The groups further held that the constitution of the zoning committee was undertaken without due consultation with critical stakeholders in the party.

The communiqué further read: “The path to a rancour-free state congress in the state is the truthful, honest and sincere engagement of critical stakeholders without a clandestine design to foist any group or candidate on the party.

“We implore leaders in the party to live up to the expectations of the exalted positions they are holding in the party and government.”

Another group, called The Core Progressives, in a statement signed by Alhaji Musibau Ahmed, described the committee as an illegality that must be disbanded immediately for the party to consolidate on the gains recorded so far in its reconciliation and reengineering process.

The group in a statement in Ibadan today declared that the advisory committee without any locus standi or any authority whatsoever to constitute any committee for the party was already usurping the powers of the Caretaker Committee of the party, a development, it said was inimical to the growth of APC in the state.

According to the statement signed by Alhaji Musibau Ahmed, Chairman of the group, the Core Progressives said that the Alao Akala committee had outlived its usefulness and as such should be disbanded forthwith by the Caretaker/Extraordinary Convention Planning Committee of the party for APC to have real progress in Oyo State.

However, amid reservations, the zoning committee, held its inaugural meeting, on Thursday.

As against the planned venue of the state party office, Oke-Ado, Ibadan, the meeting however held at the house of the chairman of the committee, Honourable Musiliu Akinremi, with six out of the nine-member committee in attendance.

It was gathered that the meeting was moved to the house of Akinremi for fear that those members who have expressed their opposition to the setting up of the zoning committee may storm the party office in protest.

While the meeting at Akinremi’s house lasted, policemen were seen manning the entrance to the party Secretariat.

A member of the zoning committee, Mr Akeem Olatunji, who spoke with the Nigerian Tribune, said the committee looked at the template for the zoning of the state executive committee offices template as forwarded to the Elders Advisory Council by the Caretaker Chairman, Oyo APC, Chief Akin Oke.

He said the meeting ended with a resolution that the committee members were tasked to look at the proposed template vis-à-vis that of other states and come up with their recommendations at its next meeting.

Meanwhile, Caretaker Chairman, Oyo APC, Chief Akin Oke, on Thursday, announced that a stakeholders’ meeting to conclude its planned zoning arrangement for the next set of state executive committee members will hold next Monday.

The decision to call a critical stakeholders meeting where they will jointly zone the party offices, came apparently against the backdrop of reservations of party members that the zoning committee announced by the Elders’ advisory committee seemed a private arrangement.

Party sources said the idea of a zoning committee only came at a meeting held between the Elders’ Advisory Council and the Chief Akin Oke-led excos, on Monday, and they were meant to meet again on Thursday for a stakeholders’ meeting to continue the discussion.

However, the Thursday meeting was cancelled following the controversy that greeted the announcement by the Elders Advisory of a zoning committee.

Owing to the controversy, the party chairman, on Wednesday evening, nullified the idea of a zoning committee and convened a stakeholders’ meeting scheduled for next Monday.

The critical stakeholders’ meeting, according to Oke, in a statement, became imperative to ensure that all tendencies, zones are carried along in the formation of the new State Executive Committee through a consensus arrangement that is devoid of partiality and sentiments.

While calling for calm and decorum among gladiators and stakeholders of the party, Oke warned those he described as “overzealous elements to caution themselves against actions capable of raising fear and suspicion.”

Oke said: “The critical stakeholders meeting slated for this Monday becomes imperative in view of the forthcoming state congress as it is our desire to hold a hitch-free exercise just like we did during the previous Ward and Local Government Congresses across the state.

“In view of this, we shall reach out to all leaders and stalwarts of our party from this Friday as only individuals duly invited would be allowed to be part of the meeting.

“The leadership of Oyo APC urges calm and decorum among gladiators and other stakeholders including party faithful and supporters as no stone would be left unturned to ensure that all tendencies, zones and 33 local government areas are carried along in the formation of the new State Executive Committee through a consensus arrangement that is devoid of partiality and sentiments.

“While we plead for the understanding of all gladiators and stakeholders within the party, we assure that all is well with the Progressive family in the state as few noises in the social media are expected at a time like this. However, we would like to warn all overzealous elements to caution themselves against actions capable of raising fear and suspicion as we maintain our resolve to prioritize only activities that would be in the overall interest of the party only.

“We want party faithful and members of the public to disregard rumours of internal crisis in Oyo APC. The rumoured crisis is a figment of the imagination of some fifth columnists who do not mean well the Nigerian society.

“Party Congresses are strictly for political parties to strengthen their structures and fulfil certain constitutional obligations. And as a Progressive party, we will always work in the best interest of our members and the general public as we are poised to return to Agodi Government House in 2023.”