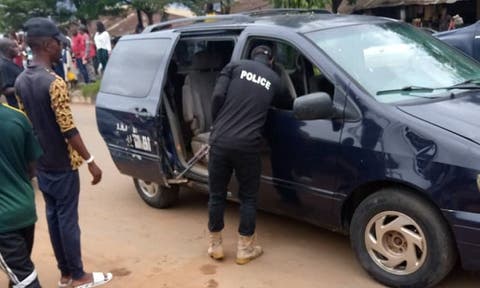 THE police in Oyo State have vowed to probe a robbery allegation levelled against some policemen purportedly attached to the command by a 20-year-old artiste, Emmanuel Jesugbemi.

Jesugbemi had claimed in a viral social media post that the sum N150,000 given to him by his grandmother to pay her rent was snatched by some policemen attached to the command at Apata area while he was on his way to deposit the money in the bank.

The state Police Public Relations Officer, Adewale Osifeso, in a statement on Friday, said: “The attention of the Oyo State police command was on Thursday, October 7, drawn to a one minute, 50 seconds video made by one Emmanuel Jesugbemi, alleging that he was, at gunpoint, robbed of his handset and cash to the tune of N150,000 by rogue police operatives, purportedly attached to the command around Apata area, under Ido LGA in Ibadan.

“It is worthy to note that the command frowns at this serious misconduct and wishes to intimate members of public that the matter was immediately escalated through an investigative inquiry set up by the Commissioner of Police, Oyo State Police Command, CP Ngozi Onadeko, upon its receipt.

“Preliminary investigations have revealed that the alleged culprit identified by the victim does not serve under Oyo State Command but was rather in the jurisdiction on other yet-to-be specified duties.

“Furthermore, investigations are in top gear to apprehend all the officers involved in the unpleasant actions of Thursday, October 7, for their various involvements, with the assurances of adequate sanctions meted out on all guilty parties upon recommendations from the Investigation panel.

“The command sues for calm while appealing to members of the public that no offender(s) would on any account be indulged to evade deserved Justice regardless of status or affiliations.”

Jesugbemi had, through an Instagram post that went viral on Wednesday, claimed that the policemen led by one Badru Samson waylaid the motorcyclist conveying him to the bank and ordered him to get down.

He said the policemen slapped him repeatedly and labelled him a fraudster. Jesugbemi, who recounted the incident in a video clip posted on his Instagram page, @official_babyjez, said the incident happened on Wednesday.

However, as of Friday morning, the page was no longer online. In the post, Jesugbemi said: “Grandma’s house rent was due, so she went to the Apata area to collect money from somebody to join [add to] what she had for the rent. After collecting the money, she called me to meet her at Apata, where she gave me the N150,000 to deposit into our landlord’s bank account.

“I boarded a motorcycle and while on my way to deposit the money in the bank, the policemen blocked my motorcyclist with a black car with no number plate and ordered me to get down. I saw four policemen in the car when I got down and one of them slapped and kicked me. He even used his gun to hit my head and called me a Yahoo Boy.

“The policemen asked for my phone and told me to unlock it; but they did not find anything [incriminating] after they checked it. They wanted to search me, but I stopped them because policemen had searched one of my friends before and in the process, they put hard drugs in his pocket. So, I willingly brought my pockets out and they saw the N150,000.”

He claimed that the policemen drove him from the Apata area to Iwo Road, where he was dropped off after he had been dispossessed of the money.

“They asked who owned it and I told them that it was for my grandma and that I was on my way to pay her house rent. The policemen said I was lying. One of them kicked my stomach and forcefully collected it from me.

“They told me to format my phone and took it; they put me inside the car and drove me from Apata to under the bridge in Iwo Road, where they dropped me off.

“I had to plead with them to give me my SIM card. They also took the extra N2,000 with me and I had to trek from Iwo Road to our house in Dugbe,” Jesugbemi added.