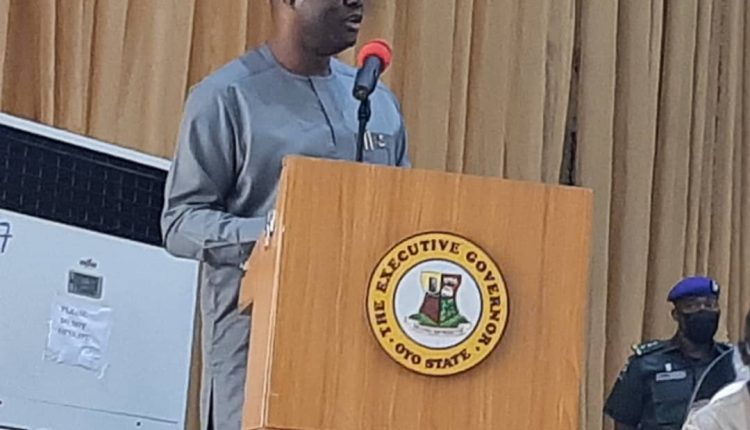 Oyo State Governor, Engr ‘Seyi Makinde, on Tuesday, described Hon. Babatunde Oduyoye, who is currently serving as his Special Adviser on Strategy and Political Matters, as a unifier.

The governor gave the commendation while speaking at the Annual Birthday Lecture Series in commemoration of the birthday of the former Minority Whip of the House of Representatives and a two-term member of the House, Hon. (Chief) Babatunde Oduyoye, at Oritsejolomi Hall, International Conference Centre, University of Ibadan.

The Lecture, with the topic: ‘Security and National Unity in Difficult Times’ was delivered by the chairman of the Nigerian Governors’ Forum (NGF) and governor of Ekiti State, Dr. Kayode Fayemi.

He equally commended the celebrant for always demonstrating a commitment to any course he believes in to the point of success, adding that, as a governor, he has won many political battles with the intervention of Oduyoye.

Makinde said: “Well, we have all listened to the lecture, which was given by a Ph.D. holder in war studies. But I only have one or two things to say about today’s celebrant, Hon Babatunde Oduyoye. Governor Fayemi said he is a good man. Yes, He is.

“In 2015, I contested to be the governor and lost. I was going around to see where I was not doing things right and then a very close brother of mine told me that I did not look for a unifier and that was why I lost the election. So, he took me to Hon. Oduyoye. And when I got to him, he said I failed because all other governorship candidates came to meet him and I did not come. And I said, going forward, we will work together. And from that point forward, he demonstrated commitment.

“And I can tell you that he flew outside the country on my behalf to go have a former governor to accept me into the fold and, at the end, of the day, God took control.

“If Hon Oduyoye makes any commitment, you can rest assured that he will follow through. So, I did not have any problem after I was sworn in as the governor and I had to appoint him as my Special Adviser and Politics and Strategy. He has been doing some talking behind the scene.

“Today, I am happy to be here for this lecture series. I pray that many more will come. And I am using you as a point of contact for Nigeria and all the October 1st celebrants. I wish all of you many more years of fruitful service to our state, our country in good health.”

Some of the previous lectures were delivered by notable personalities including the former Speaker of the House of Representatives, Hon Ghali Umar Na’Abba, the late elder statesman, Alhaji Balarabe Musa, highly-rated academics and political heavyweights.