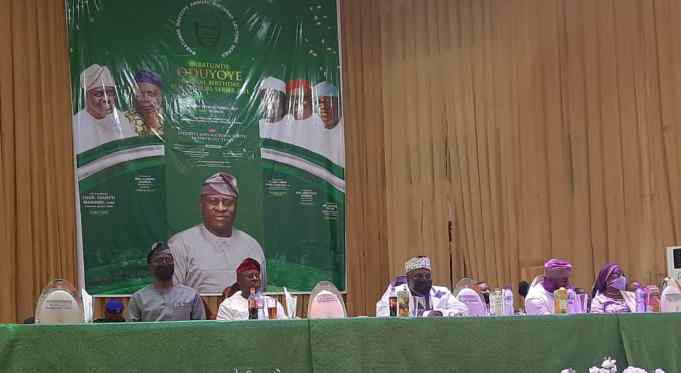 As part of efforts to ensure that the agitation for the creation of state police becomes a reality, the chairman of the Nigeria Governors’ Forum, NGF, and the Governor of Ekiti State, Dr. Kayode Fayemi, has opined that there was the need for a security system that is localised, knowledgeable about the culture and security situation of a particular community, hence the establishment of the Western Nigeria Security Network, codenamed: ‘Amotekun.”

The governor gave the opinion on Tuesday, at the 7th Babatunde Oduyoye annual birthday lecture, held at the International Conference Centre of the University of Ibadan.

Fayemi, while speaking on the theme: “Security and National Unity in Difficult Times,” stressed that the challenge of insecurity in Nigeria has become frightening and is getting all and sundry concerned.

He stressed that it has become imperative to amend the constitution to empower the various security initiatives to be able to respond to the current challenges in the country.

His words: “The challenge of insecurity in Nigeria is frightening and is getting all of us concerned. At the dawn of the current democratic dispensation in 1999, the major concern of security experts was the staccato of ethnic and religions violence that was common then, that was before the dawn of the Niger-Delta militancy which took almost a decade.

“A new phenomenon in insecurity however waded in with the violent campaign of Boko Haram activities in many parts of the north.”

“Added to this is Nigeria’s extensive and porous borders covering over 4000 kilometres littered with illegal entry points and routes totalling 1500 points.”

“With the porous borders, criminal gangs and terrorist insurgents could easily stroll in with smuggled weapons into the country which in turn are sold to sea pirates, cultist, armed robbers, kidnappers, bandits and other purveyors of violence in the Nigerian state.”

“In fact the creation of Amotekun can only be a precursor to this. We need a security system that is localised, knowledgeable about the culture and security situation of a particular community.”

“But we need to amend the constitution to empower the various security initiatives to be able to respond to the current challenges.”

“For example, despite not possessing Ak47 which the bandits possess, Amotekun operatives have been courageous to confront them in the forest and have successfully rescued victims of kidnapping and arrested the criminals in some instances.”

“Yet, these people are at best, volunteer corps with encouragement stipend paid to them. They don’t earn as much as the conventional police, yet they are better motivated to throw themselves to the protection of the community where they have their wives, children and families.”

As a panacea to Nigeria’s security challenges Governor Fayemi advocated the need for unity the face of the evil merchants who have no respect for children, old age, women, clergy or traditional authorities.

“They are unsparing and are callous. They have no sympathy for religion, ethnicity or authority and undiscriminating in the pursuit of their satanic enterprise. We must not be ashamed to call for assistance from wherever we can get it in terms of technology, equipment and personnel.”

“In addition, there are two things that we need to address quickly to bring the current wave of insecurity to a halt. We need to have a conversation on how we can recruit a large number of people to join the police and the military even on a short service or otherwise.

“By available statistics, we need minimum of two hundred thousand personnel to boost the fighting power of our men. This number is very large and a potential financial and logistic nightmare, yet we cannot delay any further. The ungoverned spaces need to be closed up quickly by motivated men with the singular objective to save the nation,” Fayemi posited.