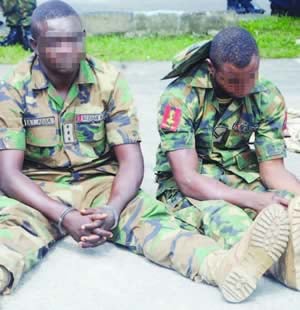 A 42- year old fake military officer, Muhammed Yahaya, was on Thursday sentenced to 12 months imprisonment by an Agodi Magistrates’ Court, Ibadan in Oyo State for impersonation and stealing.

Yahaya had, on Sept. 30, pleaded quilty to the the four – count charge of impersonation, obtaining money under pretence, stealing and conduct likely to cause breach of public peace.

According to the case charge sheet, Yahaya, on Sept. 7, at Iwo road, Ibadan, did impersonate Nigeria Army and obtained the sum of N300,000 from a Muslim association led by one Mallam Yusuf Adepoju, on pretence as a member of the Nigeria Army.

The convict was also accused of stealing the said amount and conducted himself in a manner to cause breach of peace.

Oriola had told the court that Yahaya, approached the Muslim association in a military uniform, lied to have had an accident while on duty and that the Nigeria Army abandoned him to his fate, thereby sought for assistance from the association.

He further testified that the association, having sympathised with the convict paid N250,000 into his bank account and later gave him the balance in cash.

The Senior Magistrate, Mrs Victoria Olorioke, in her judgement said she convicted and sentenced Yahaya based on the evidence and exhibits tendered against him.

Olorioke, said the witness’ evidences in the case and that of the Police prosecutor, had proved that Yahaya actually committed the offences.

She, therefore, convicted him on all the four count charges and sentenced him to three months imprisonment for each of the charges, totalled 12 months.

Yahaya, before his sentence, pleaded with the court to have mercy on him, saying that he regretted his action and promised to turn a new leaf.