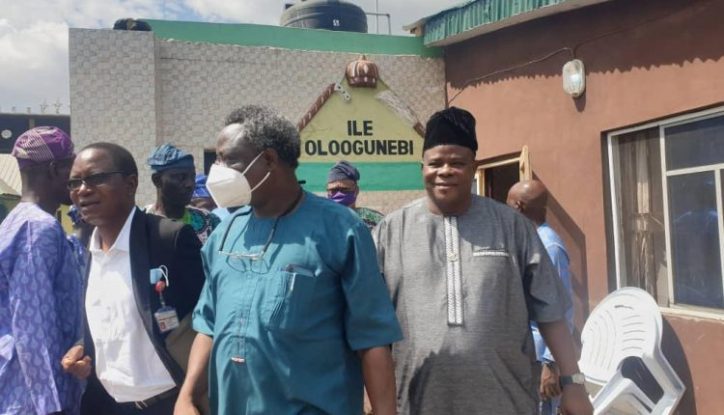 This was made public on Tuesday evening at Iseyin by the Chairman, Governing Council of LAUTECH, Professor Ayodeji Omole, who led other members of the council and management members of the University, on fact-finding mission to ascertain the cost of putting up structures and renovating existing buildings for administrative, research and residential purposes.

Omole hinted that with the release of the take-off grant, work would start in earnest, as Governor Seyi Makinde would do the turning of sod at the administrative site of the College along Okeho road by November, 2021.

The Chairman who visited the Aseyin of Iseyin, Oba Dr. Abdulganiy Salawudeen Adekunle Oloogunebi Ajinese 1, said “we appreciate the community through Kabiyesi for the support received so far on this project, at the outset, some people believed the issue of some ownership of LAUTECH would not be possible, but for the doggedness of the Governor, we here today.

“I want to announce here that the take-off grant for work to start at the College has been released, by next month (November), the Governor himself will come and do the turning of sod for construction works to commence.

“The Governor has also promised that the institution will get more funding from the 2022 budget, as it has been captured in the 2022 annual financial estimate, so the community must brave itself for the works ahead.”

Prof. Omole called on the community to provide more land for the university project as the available acquired land has been exhausted on projections based on research, academics and other aspects of the institution’s projects.

He said all eventualities should be put into consideration at the present moment of putting life into the College, as according to him, the College might eventually become a full-fledged university.

He also asked residents to relate well with students and staff members of the College as he reckoned that they would be coming from different homes, backgrounds and with different orientations.

“The land allocated so far is so small and working with the allocations done on paper for the projects for different aspects of academics, research and other other areas, we need more.

“You never can say, this College may eventually become a full-fledged University, the community needs to acquire more land.

“University normally changes the landscape of the community as students will be coming from different backgrounds with different orientations, our people should please accommodate them.”

The Aseyin of Iseyin in his remark, gave kudos to Governor Seyi Makinde for not neglecting Iseyin community in his strive to make Oyo State an envy of other States in Nigeria.

He assured the LAUTECH Council and management staff of security of lives and properties of students and staffers of the College, assuring the delegation that upon commencement of construction works at the College site, indigenes of Iseyin would rally support for the success of the project.

The National President of Iseyin Development Union (I.D.U), Alhaji Bayo Raji told the delegation that apart from the acquired land that has been handed over to the authority of the College, another 50 acres of land was presently being acquired for the institution.

Raji praised the administration of Governor Seyi Makinde for not looking back in his determination to restore the old glories of Oyo State through education, healthcare and social infrastructure.