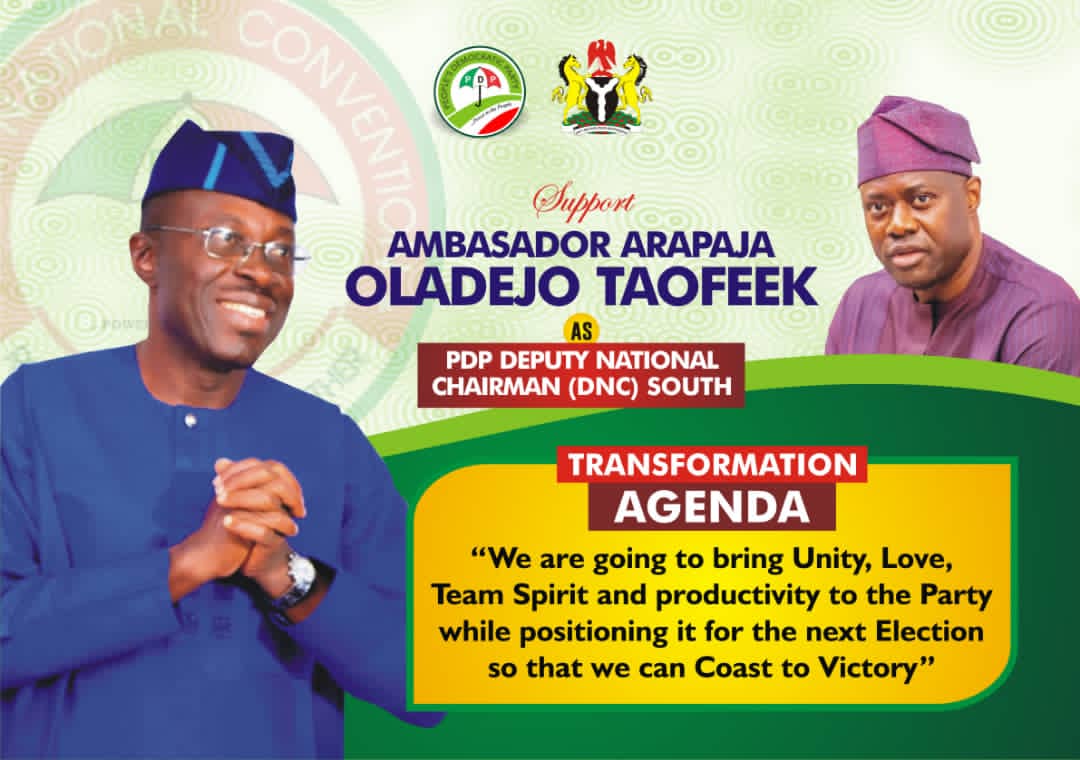 What You Need To Know About The Man Called ARAPAJA

William Shakespeare says: “Be not afraid of greatness. some are born great. some achieve greatness, & others have greatness thrust upon them.”

Ambassador Taofeek Oladejo Arapaja a thorough bred and grassroot politician was born to the family of Mr and Mrs Oladimeji Oladejo arapaja of Kudeti/Idi Arere, Ibadan, Oyo State on the 10th November, 1958. Young Taofeek Arapaja started his education career at Ibadan Public Day School, Kobomoje, Ibadan between 1966 and 1972. He proceeded to Lagelu Grammar School, Agugu, Ibadan between 1973 and 1978. While there, he was the President of the Muslim Students’ Society (MSS).

His father, Pa Ladimeji Oladejo who died on the rostrum during a Presidential campaign rally for late Chief Obafemi Awolowo at lwo, in the old Oyo State delayed his study abroad earlier, fixed for January, 1980.

He thereafter travelled to the United Kingdom where he obtained a Diploma in Marketing from the Institute of Marketing. He also obtained a Diploma in Business Administration from the University of Wales, Institute of Science and Technology and equally bagged a Masters Degree in Business Administration (Finance & Marketing) from University of Wales, Cardiff, United Kingdom in December, 1986.

Like his late father, he joined the murky water of politics in November, 1991 when he was elected National Delegate (Wards 1 & 2) in the then Ibadan Municipal Government (IMG). The following year, he aspired to contest for the House of Representatives election under the platform of the defunct Social Democratic Party (SDP) but was asked to step down by the leaders of the said party. He was later appointed as part time Commissioner in the Oyo State Teaching Service Commission in September, 1992. He held the position till November, 1993 when the political structures were truncated by the then military government.

Similarly, in May, 2007, he was sworn in as the Deputy Governor to Otunba Christopher Adebayo Alao Akala and during their tenure, he was adjudged as the most loyal and dedicated Deputy Governor.

In July, 2012, Ambassador Arapaja was appointed as the Nigerian Ambassador to the Hashemite Kingdom of Jordan by the former President Goodluck Jonathan. His achievements while in Jordan include, ensuring the direct flight between Jordan and Nigeria which had reduced the rigours of the hitherto cumbersome journey of travelers between the two countries. He also facilitated the signing of the Bilateral Air Service Agreement and Economic Scientific and Technical Cooperation Agreement between Jordan and Nigeria.
In April, 2014, Ambassador Arapaja was given yet another Ambassadorial appointment to the Republic of Iraq, Baghdad on concurrent accreditation, thus making him envoy to two countries simultaneously.

While in Jordan, Ambassador Arapaja facilitated the establishment of the Jordan chapter of the Redeemed Christian Church of God (RCCG) under the supervision of Pastor Enoch Adejare Adeboye with Pastor Sam Nkana as the pastor-in-charge.

In November, 2014, Ambassador Taofeek Arapaja was installed the Dean of African Ambassadors to the Hashemite Kingdom of Jordan, an office he held until the 6th August, 2015.

In April, 2021, Ambassador Arapaja was elected as the National Vice Chairman (South West) at the zonal congress held in Osogbo in April, 2021, the position he held till he is contesting for Deputy National Chairman people’s Democratic Party (PDP) position.

Ambassador Taofeek Arapaja holds the chieftaincy traditional titles as “Asiwaju Bashorun Atunluto of Ibadanland conferred on him by the late Olubadan of Ibadanland, Oba Emmanuel Adeyemo Operinde 1. The appellation, “Oluomo of Ibadanland” was added to his nomenclature by his late political godfather and generalissimo of Ibadan politics, High Chief Lamidi Ariyibi Adedibu in 1996.

Ambassador Arapaja is a member of reputable institutions such as the Institution of Marketing and International Association of Book-Keepers. He is married and the marriage is blessed with children.