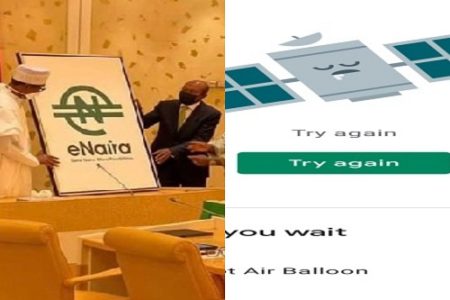 The eNaira speed wallet application is down 48 hours after the digital currency was launched on Monday checks by The Nation have shown.

eNaira is a digital currency issued by CBN. It’s a digital form of the naira that is housed in a secured wallet called the eNaira wallet.

To access the eNaira, users have to download the ‘speed wallet’, which allows users to conduct transactions with speed and ease.

Aside from the Google Store, the wallet can also be downloaded from the Apple Store.

Checks by The Nation show that the speed wallet for eNaira recorded over 100,000 thousand downloads on Google Play store alone after it was launched.

In a statement on the eNaira website, CBN said interested individuals can sign-up on the eNaira speed wallet by inputting their details as captured during BVN enrollment.

The details include First Name, Last Name, Date of Birth, State of Origin, and Email.

“Your Banks are waiting to assist you in validating and updating your BVN details to ensure seamless enrolment to the eNaira Platform,” the statement reads.

The Nation’s correspondent checked google play store on Wednesday evening and could not download the eNaira speed wallet, while the eNaira merchant wallet was available for download.

As the time of report, the Central Bank is yet to make a statement on the cause of the technical outage.