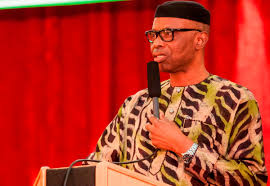 The Ondo State former governor, Olusegun Mimiko, has turned down offers presented before him by the ruling party, All Progressives Congress (APC), and has concluded plans to rejoin the Peoples Democratic Party (PDP), ahead of the 2023 general election in the country.

Mimiko, who had earlier held meetings with emissaries from both the APC and PDP, would be returning to the opposition which he left barely three years ago to form Zenith Labour Party (ZLP).

Mimiko’s decision to join the opposition party was disclosed by the Adamawa state governor, Amadu Fintiri, on Tuesday during an interview on a popular television programme while discussing PDP plans to win the 2023 presidential election and their forthcoming National Congress in the country.

Fintiri, who also doubles as the PDP chairman for the National convention, added that the former governor would be formally returning to PDP tomorrow, Wednesday, alongside thousands of his supporters across the country.

The governor, meanwhile, vowed to work for former Vice President, Atiku Abubakar, whenever he declares his intention to contents for the next presidential election.

He described the relationship between him and Atiku as that of a father and son, saying I will not think it twice to work for him whenever he makes his intention public.