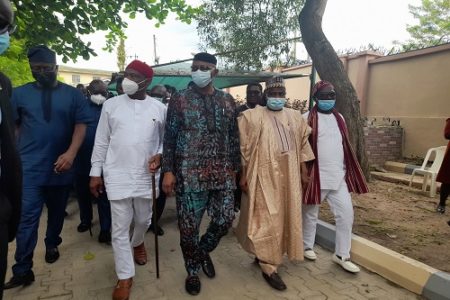 BREAKING: Makinde, Wike, Tambuwal In Ondo To Woo Mimiko Back To PDP

Four Peoples Democratic Party(PDP) Governors are in Ondo State to woo former Governor Olusegun Mimiko back to the party.

A large number of Zenith Labour Party(ZLP) members are at the residence of Mimiko in Ondo town to welcome the PDP contingent led by Oyo Governor Seyi Makinde.

Other Governors in the team are Nyesom Wike(Rivers); Okezie Ikpeazu (Abia) and Aminu Tambuwal(Sokoto).

They are meeting behind closed doors with Mimiko.

It was gathered that the Governors are to formalise talks with Mimiko on his return to the party.

Sources said Mimiko is expected to meet with leaders of ZLP in the State to formally announce his movement to the PDP.

Immediate past Deputy Governor and candidate of the ZLP in last year’s governorship election, Agboola Ajayi, is expected to defect to the PDP with him.

Mimiko was a member of the Alliance for Democracy (AD) in 1999 and served as Commissioner for Health in the late Adefarati administration.

He defected to the PDP and was made Minister under former President Olusegun Obasanjo.

He was however elected Governor on the platform of the Labour Party(LP) but return to the PDP before the end of his administration.

Mimiko, known as the Iroko, defected to the Zenith Labour Party (ZLP) ahead of the 2019 general elections where he contested for the Ondo Central Senatorial seat but lost.