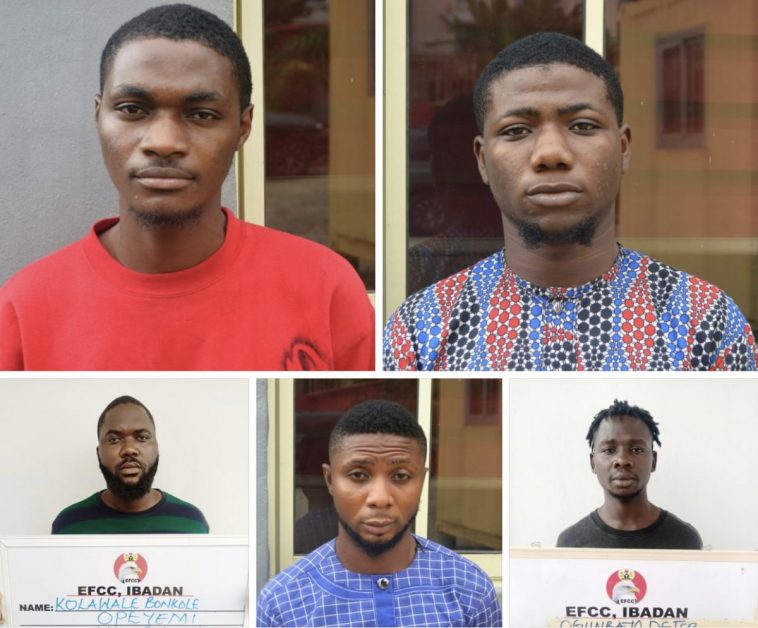 The convicts, Ogunbayo Peter Oluwatobiloba (aka Racheal Brinkley), Charles Jude Albert, Kolawole Bankole Opeyemi, Bello Tobiloba Abdullahi and Obitokun olugbade Solomon were found guilty of impersonation, an offence which contravenes section 22(2)(b)(1) of the Cybercrime (Prohibition, Prevention, Etc) Act 2015 and punishable under section 22(2)(b) of the same Act.

Bello and kolawole were convicted and sentenced to ten months imprisonment each; Ogunbayo, nine months; Obitokun, eight months, while Albert was sentenced to five months in prison.

They had earlier pleaded guilty to their respective charges in line with the conditions of the plea bargain agreement reached with the Commission.

Justice Agomoh also ordered Kolawole to restitute his victim the sum of $5,100USD (Five Thousand One Hundred United States Dollars). The convict is also to forfeit one iPhone 11 Pro Max and one iPhone 7 plus to the Federal Government.

Bello is also to restitute the sum of $200USD (Two Hundred United States Dollars) to his victim through the Federal government of Nigeria and forfeits one black iPhone 11 to the Federal Government.

Ogunbayo is to restitute the sum of $500USD (Five Hundred United States Dollars) and N145, 000 (One Hundred and Forty Five Thousand Naira) to his victim through the Federal Government of Nigeria.

In the same vein, Albert forfeits one iPhone 12, one iPhone 6, one Access Bank ATM card and one Airpod to the Federal Government.