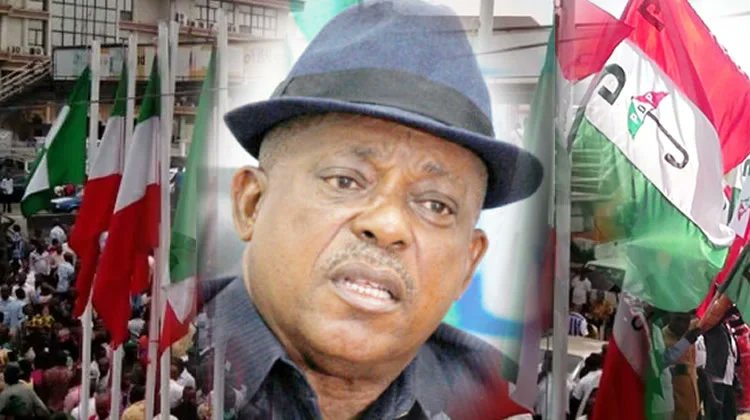 Some of the 3,600 delegates expected for the national convention of the Peoples Democratic Party have started arriving in Abuja, the nation’s capital.

One of our correspondents, who visited the Eagle Square, venue of the event, on Thursday, observed that the PDP flag had been hoisted in the venue, while banners and decorations adorned the area. A podium had also been assembled at the centre of the square.

“I’m already in Abuja; the congress is on; it will hold,” the Gombe State Chairman of the party, Maj Gen Mamman Kwaskebe (retd.), told one of our correspondents on the telephone.

However, there is uncertainty in the atmosphere due to a pending appeal filed by the party’s suspended Chairman, Uche Secondus.

An Appeal Court sitting in Port Harcourt, Rivers State, on Thursday, reserved ruling on the appeal filed by Secondus seeking the suspension of the national convention scheduled for Saturday and Sunday.

Secondus, through his counsel, Tayo Oyetibo (SAN), in an appeal marked CP/PH/339/2021, is seeking an order of injunction restraining the PDP, its officers and representatives from holding or conducting the national convention on Saturday and Sunday, or any other date pending the hearing and final determination of the appeal.

However, when the court resumed sitting on Thursday to entertain and rule on the legal submissions of all parties, Oyetibo told the court that in adherence to its directives, he had amended the processes earlier served on all respondents and added the names of all the parties.

Oyetibo said all the 11 respondents had been served the amended processes, adding that one of his motions was filed afresh on October 27 and was ready to be taken.

He noted that Article 35(1B) of the PDP Constitution, made pursuant to Section 222(C) of the 1999 Nigerian Constitution, used the word “shall” and vested in the national chairman the right and not a privilege to preside over the national convention.

Oyetibo told the court that the intention of his application was not to prohibit the national convention, but to suspend it pending the determination of issues of leadership of the party, stressing that what the court was not to stop were primaries of political parties and general elections.

Bello argued that the application sought the determination of the main appeal, which was the leadership of the party, without a hearing, noting that such prayers were not attainable.

He said the five grounds of the appellant’s amended notice of appeal had no iota of allusion to the national convention of the PDP (6th respondent), adding that the application was a radical departure and alien to the main appeal.

Similarly, counsel for the PDP, S. I. Ameh, SAN, prayed the court to dismiss the application, saying the balance of convenience was on the court not to grant the application, because it fell within the set time for the convention as set by the Independent National Electoral Commission.

Counsel for the 8th respondent, Godwin Obla, SAN, in a 21-paragraph affidavit sworn to by one Joy Okonkwo, urged the court not to find merit in the application, but to dismiss it.

Also, Donald Dee-Wigwe, SAN, who represented the 9th and 10th respondents, told the court that the office of national chairman was a political privilege and that the decision of the High Court that sacked Secondus terminated that privilege.

Dee-Wigwe noted that being a political privilege, it could not attract a judicial response and urged the court to dismiss the application.

After listening to the arguments, the three-man panel led by Justice Haruna Tsammani reserved ruling on the appeal for today (Friday) by noon.

“We are reserving ruling on this matter for Friday by 12 noon. Nobody has said anything about setting aside the application,” Justice Tsammani said.

The judge warned the media against publishing unsubstantiated reports about the proceedings of the court.

The Chairman of the PDP in Cross River State, Venatius Ikem, said he was confident that the convention would hold as scheduled.

He said he was already in Abuja with several delegates also arriving from various parts of the country for the convention.

“Several delegates have started arriving. We are already here. All reservations and necessary arrangements are being made.”

The National Publicity Secretary of the party, Kola Ologbondiyan, said, “Preparations for our national convention are in top gear. You can go to the Eagle Square to see things for yourself. We are ready to deliver the best convention in recent memory.”

On his part, the Adamawa State Governor and Chairman of the PDP National Convention Organising Committee, Ahmadu Fintiri, predicted the collapse of the ruling All Progressives Congress on or before 2023.

Fintiri made the prediction while speaking to journalists at the party’s secretariat in Abuja on Thursday.

He assured party faithful of a hitch-free convention, which he noted would bring the APC down to its knees.

According to him, preparations for the convention are going ahead as planned.

Fintiri spoke just as governors elected on the party’s platform were locked in a meeting, which commenced around 5pm and was still on as of 8.25pm.

The governor said, “I foresee that by the end of this convention, which will be adjudged as one of the best in the history of not just the PDP, but of any political party in this country, most of the political parties will go down, especially the APC.

“We saw what happened with their democratic process. Their ward and state congresses were really shattered. Instead of having 36 chairmen, they have about 90 plus.

“So, with this convention that we’re going to deliver, I believe that with the democratic process and procedures that we have followed diligently, it will open the floodgate for all of them to come in.

Also speaking, the Deputy Chairman of the committee and Bayelsa State Governor, Duoye Diri, urged Nigerians to have faith in the PDP, adding that the party was poised to rescue the country from the clutches of the APC.

He said, “We like to call on Nigerians at home and in the Diaspora to say there is hope for this country, and this is the right time to rescue the country from the brink of collapse.

“Nigeria is bleeding and whether you are at home or abroad, this is your country, and it is time for you to now join hands with the only opposition party that has been reorganised and that is looking forward to having a brand new National Executive Committee elected come Saturday.

“So, we call on our brothers and sisters at home and abroad to join hands with the main opposition political party to rescue Nigeria.”

In response, a former Deputy Publicity Secretary of the APC, Yekini Nabena, said, “It is laughable that a party that has lost direction is making such a prediction.

“This is a party that has lost three sitting governors already and more are coming. I don’t think the two governors should be taken seriously.”

There’s No Better Time To Resign Than Now, Before It Would Cause Too Much Political Assumptions And Unnecessary Speculations– Ojasope Breaks Silence