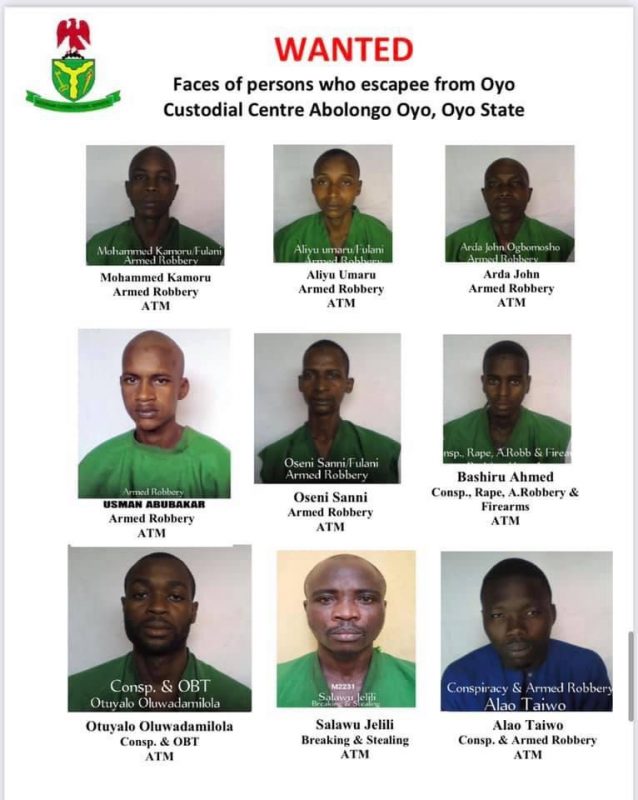 About 101 accused who were arrested for alleged armed robbery are among the inmates that escaped from the Medium Security Custodial Centre in Oyo town, Oyo State.

Twenty three others, whose details were released, were said to be in custody for sexual-related offences such as rape and defilement, while 12 among them were alleged kidnappers.

Recall that hundreds of inmates escaped from the facility when some hoodlums invaded the correctional centre.

To ensure that all those who escaped from the prison during the attack and had refused to return are brought back, the Ministry of Interior late Friday night released the names, photographs and nature of the offence of those who are still at large.

The ministry, which is headed the Minister of Interior, Rauf Aregbesola, warned that the fleeing inmates were dangerous and that the only assistance members of the public could do was to alert security agents of their presence anywhere they were found.

A note written beside the data of the 200 fleeing inmates read, “Names and faces of wanted persons, who escaped from the Oyo Custodial Centre on Friday 22nd October, 2021. Please note that these persons are dangerous!

“Kindly contact the nearest police station or security agency close to you when you sight any of these persons.

“Note: It is a crime punishable under the law to render any form of assistance to these persons.”

The minister had vowed that the Federal Government would do everything to bring all the fleeing inmates back to the facility either dead or alive, saying the attack was to ridicule the government.

Aregbesola added that, “We are going after every single inmate that escaped from custody. We shall hunt them to the ends of the earth. All the security agencies in the country are on their trail. We shall not rest or tire until we bring the last one in, dead or alive.”

Below are the pictures of the fleeing inmates.