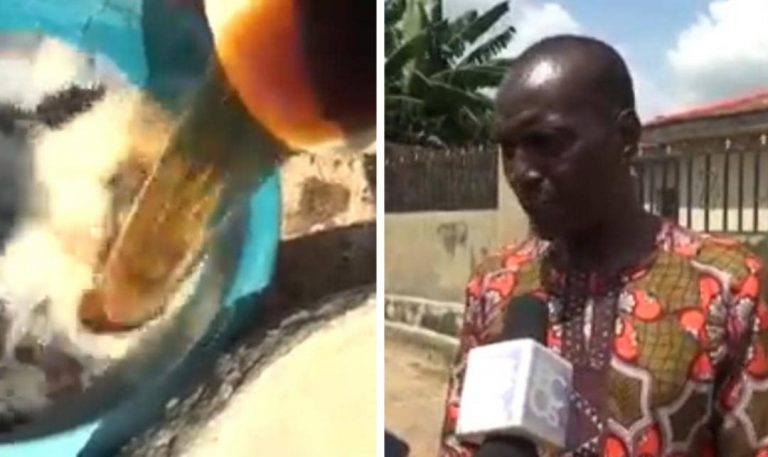 Residents Send SOS To Oyo Govt Over Discovery Of Petrol In Wells, Boreholes

Residents of Oremeji Compound, Eleta Estate in Elebu Area of Ibadan have called on the Oyo State Government and the Nigerian National Petroleum Corporation, NNPC to rescue them from a possible fire outbreak and death from water poisoning after contamination of their water by presumed Premium Motor Spirit, popularly known as Petrol.

The contamination which keeps spreading like wildfire across the estate affecting streams, boreholes and wells was first noticed by residents on Friday and continues to spread till the time of filing this report.

To confirm their suspicion on the presence of petrol in the water, residents took a portion of the water from the well and struck a match near it, immediately the water caught fire and burned as if one was burning crude oil.

Meanwhile, the residents are not only battling the contamination but also security threats from “area boys” in the community in scores who threatened thunder and brimstone if the residents do not allow them to “fetch the petrol” in their wells and boreholes.

In an interview with correspondents of the Broadcasting Corporation of Oyo State, BCOS, residents narrated their ordeal noting that they couldn’t cook, bathe and those that ignorantly drank the water complained of headache, fever and kerosene breath.

Residents say that they have reported the case to NNPC who have come to check the affected wells and boreholes but the reason for the contamination remains unidentified as the only petrol station in the area that could be identified as the probable cause had got burnt in May 2020 and has not been opened sinced then.

Speaking on the development, a Water Expert, Engineer Michael Ale called on the government should swing into action as this might be a disaster waiting to happen.

Politicking Is Over, It’s Time To Rescue Nigeria ― Arapaja