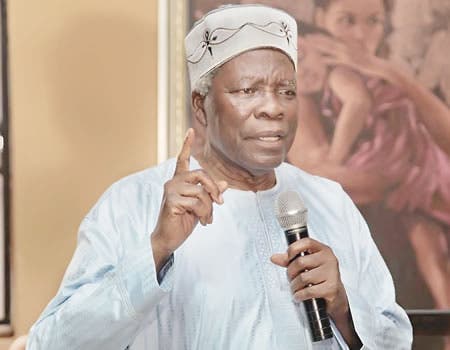 Akintoye, a renowned Historian who hails from Ado-Ekiti, represented the Old Ondo State in the Senate from 1979 to 1983. According to a statement by the communication secretary of Ilana Omo Oodua, Maxwell Adeleye, the gunmen who came to the premises at about 6:00 a.m. on Saturday, fired gunshots into the building but did not gain entrance.

The statement said: “The security guard in the house informed me that the gunmen fired shots into the building at about 6:10 a.m., but did not enter the house, though Baba Akintoye was not around.

“It was after they(gunmen) left that the guard, who had earlier taken cover saw the bullets in the house and damaged ceiling.”

The incident, it said, had been reported at the police area command in the state capital.

Adeleye, while condemning the invasion of the house, said the group would hold the Federal Government responsible if anything untoward happens to the Akintoye or his relations.

Adeleye in a statement on Tuesday said, “bullets suspected to be from AK-47 rifles were recovered after they dropped from the ceiling onto the floor.

“Recall that few months ago, unknown armed men invaded the house of the scion of the Akintoye dynasty, Ademola, an engineer, in Agbor, Delta State, destroying the building, including his fish pond.

“The police have not arrested anyone up till this moment.

“We the Yoruba people within and beyond the horizon of Nigeria will hold the Nigerian government responsible if any evil happens to our leader or any or his relations.”

When contacted, the Police Public Relations Officer (PPRO) in the state, ASP Sunday Abutu, who could not confirm the incident, however, said the Commissioner of Police, Tunde Mobayo, had ordered for thorough investigation into the alleged attack.

The PPRO said: “The police were not informed and not aware of the alleged attack. “However, the commissioner of police has ordered an investigation into the alleged incident to ascertain the truth and ensure those involved are brought to book if confirmed true.”