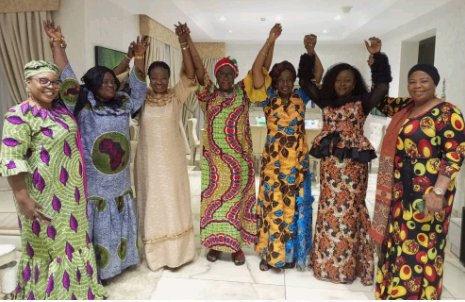 The founding mothers of the People’s Democratic Party (PDP) have pledged to give the necessary supports to the National Women Leader-elect, Professor Stella Effah-Attoe in order for her to succeed in the new task.

The PDP women stakeholders gave the assurances at difference fora when Professor Attoe and her team paid “Thank You” visits to them.

In the entourage was Hon. Hellen Taiwo Adebakin, the Campaign Director-General of the Professor Attoe in the just concluded National PDP Convention. Adebakin, the Secretary of the former and serving National Ex-officio members of the PDP.

The first port of call of the entourage was the residence of Hajia Ina Ciroma, then the former First Lady of Oyo State, Alhaja Mutiat Ladoja, former Minister of Women Affairs and former PDP National Women Leader, Barrister Josephine Aninih.

While receiving the entourage, Alhaja Ladoja, who congratulated Professor Attoe expressed optimism that she would add value to the women course and the party.

Alhaja Ladoja urged women to always play their part in the ongoing task of rebuilding the party, stressing that women would play a crucial role in the task of returning PDP to Aso Rock.

” Let us be united. every one of us must play her own role. It is only women that can rescue our party. It is we(women) that can help our party. Where there are lapses, we should find ways of mending them. When everybody contributes her quota things would change for the better for Nigeria.”

Speaking with Independent after the visits, Hon Adebakin who described the parley as a family affair also described the emergence of Professor Attoe as a new dawn.

She explained that it was an indication that the PDP is getting more united ahead of the all-important 2023 General Elections.

” I am excited about the way we were received by our mothers. It was indeed a family affair. It Is a signal that PDP women are getting more united for our coming elections by God grace” Adebakin said.