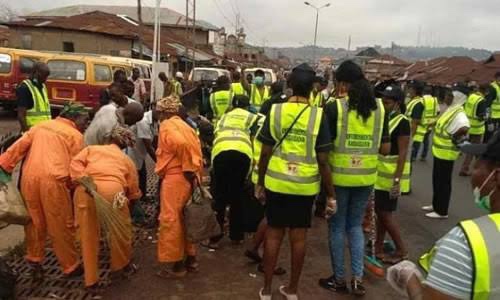 Oyo State Commissioner for Environment and Natural Resources, Mr. Abiodun Oni during a meeting with selected market leaders in the state, has insisted that the state government did not cancel Thursday weekly environmental sanitation and Saturday monthly environmental exercise.

The commissioner explained that instead of enforcing sanitation exercise for only Thursdays and monthly exercise, it has become necessary to appeal to market men and women as well as residents in the state, to make environmental sanitation a daily routine, just like people take care of their various houses daily.

While urging Eleyele and Aleshinloye markets as well as communities around Mobil-Ringroad and Sabo-Mokola to maintain a cleaner environment, Mr. Abiodun Oni equally noted that the state government would commence a practice of naming and shaming markets and communities who do not keep their environment clean.

In response, the treasurer Alesinloye market, Mrs. Betiku Oluwayemisi and Mrs. Toyin Alayande, secretary Bodija market; who spoke on behalf of other market leaders agreed that it was necessary to ensure environmental sanitation becomes a daily routine across markets in the state to achieve a cleaner and healthier Oyo state.

Similarly, in enforcing its policy on indiscriminate dump of refuse, Oyo state environmental task force tribunal, arraigned 60 offenders on various count charges and sanctioned them with payment of fines and (or) community services.