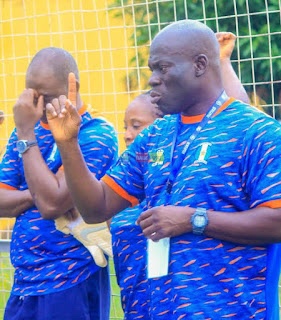 The Head Coach of Shooting Stars, Edith Olumide Agoye has sent a message to the teeming fans and supporters of the Oluyole Warriors, ahead of the Nigeria Professional Football League season which is expected to start this month, saying preparations are underway to build a formidable team.

Agoye disclosed this on Friday at the Jericho club office while discussing plans ahead of the new season and appraising how the players are doing after two pre-season tournaments.

He said, “Now we are back to the drawing board, working on the new and old players, working on tactics. The four years we spent at the NNL is a reminder. We are ready to get right preparations before the NPFL starts, so that we can present a formidable team. A team that all the supporters will be proud of, a team that will be competitive, a team that will go into any battle field with the sole aim of winning the three points at stake.

“We are not in that level yet, but we’re working seriously to achieve the set goals of a team”, he added.

Recall that shooting stars took part at the just concluded Gov. Dapo Abiodun Pre-season Tournament and Taiwo Ogunjobi Pre-season Gold Cup at Ijebu ode and Ikenne respectively. The team were at the finals but lost to Kwara United and Remo Stars.