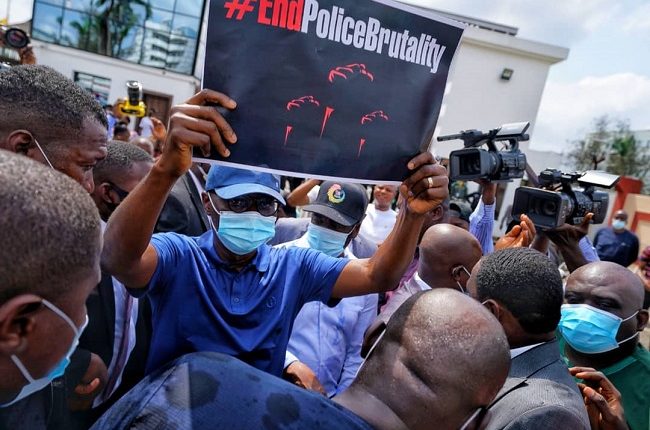 THE judicial panel of inquiry set up by the Lagos State government to investigate the incident of October 20, 2020 at the Lekki toll- gate has established killings, which, it said, can be equated to a ‘massacre.’

The Justice Doris Okuwobi-led panel submitted its report to the Lagos State governor, Mr Babajide Sanwo-Olu, on Monday and stated that about nine people were killed at Lekki tollgate.

Though the document has not been released officially by the Lagos State government, sources said at least 48 protesters were either shot dead, injured with bullets wounds or assaulted by soldiers who stormed the Lekki tollgate on October 20, 2020. In its recommendations, the panel stressed that all those involved in the attack on youths should be made to face disciplinary measures.

The panel indicted soldiers and implicated Nigeria’s security agents in the killing and forced disappearances of harmless and unarmed youths protesting at Lekki tollgate.

Meanwhile, Governor Sanwo-Olu, on Monday set up a four-member committee led by state Attorney-General and Commissioner for Justice, Mr Moyosore Onigbanjo, to raise a White Paper on the reports submitted by the judicial panel.

Sanwo-Olu said the committee would bring forward a White Paper within the next two weeks to be considered by the Lagos State Executive Council, pledging that the reports and recommendations will be made public and submitted to the National Economic Council (NEC) for discussion.

He constituted the committee after receiving the two reports of the Lagos State Judicial Panel of Inquiry on Restitution for victims of SARS related abuses and other matters presented to him at the Lagos House, Ikeja by Justice Okuwobi (retd).

Sanwo-Olu also reassured Nigerians, especially residents of Lagos, that the government’s action would be guided by the law and in the public interest, just as he expressed hope that government’s decision on the re- ports would bring complete healing, reconciliation and restitution.

He stated: “We will ensure that the recommendations that are coming out that will be turned into a White Paper and would be made available to the public. We will do it appropriately so that history will judge us well and we will have a document that will stand the test of time. That is what the tribunal law says, so that it will be properly documented and gazetted in government’s record.”

Speaking earlier, Justice Okuwobi had expressed appreciation to the Lagos State government and all the stakeholders who appeared before the panel, just as she commended members of the panel for their uncommon resolve to bring closure to the assignment and good teamwork. Okuwobi, who disclosed that the panel awarded a total of N410 million to 70 victims of police brutality, said 235 petitions were received with only 14 of it being on the alleged Lekki shooting incident.

Meanwhile, reacting to the submission of the report by the panel, Lagos-based rights activist and lawyer, Ebun-Olu Adegboruwa, stated that he will not subscribe to anything that would amount to covering up the report of the panel, adding that the panel has done its work the best way that it could.

Adegboruwa, in a release shortly after a brief handover ceremony at the Government House, Alausa, Ikeja, said Nigerians should demand for justice against all culprits named in detail in the report.

He stated that he will keep observing the turn of events and, at the appropriate time, he may be forced to state the full contents of the report if the promises made are not fulfilled. “It is my view that Lagos State, having appeared before the panel as a party, having tendered documents before the panel and led witnesses to take a position on the incident of the Lekki toll- gate, it will be unfair and im- proper for Lagos State to be a judge in its own cause, by seeking to review the report of the panel.

“However, the governor explained to me that this would only be done to enable the government implement the findings and recommendations of the panel and not to tamper with it or mutilate it. I believe His Excellency. I thank the government and people of Lagos State, fellow panel members, the Nigerian Bar Association, civil society, our comrades far and near, the media and all those who inspired and encouraged us on the path of truth and justice,” he said.

Adegboruwa explained that the panel affirmed the rights of the people of Nigeria to constitutionally guaranteed freedom of lawful assembly and peaceful protests, freedom of association and freedom of expression and made far-reaching recommendations concerning the major actors that were found culpable, in order to achieve true healing and reconciliation.

“Although I have my own copy of the report of the panel, I will allow the governor of Lagos State to fulfill his promise to Nigerians to make the findings and recommendations of the panel public. That is the only way to build a true nation and avoid a repeat of the atrocious acts of security agencies against our people, especially the youth, the vulnerable and the helpless,” Adegboruwa remarked.

He stated that “The panel was inaugurated in October 2020 to look into complaints of citizens against human rights abuses by the police, following the incident at the Lekki tollgate on October 20, 2020 and it sat for over one year, listening to testimonies of petitioners, their witnesses, experts and lawyers.

According to Adegboruwa, “the governor of Lagos State was true to his word and granted total independence to the panel and members worked according to their conscience and based upon our common conviction.”