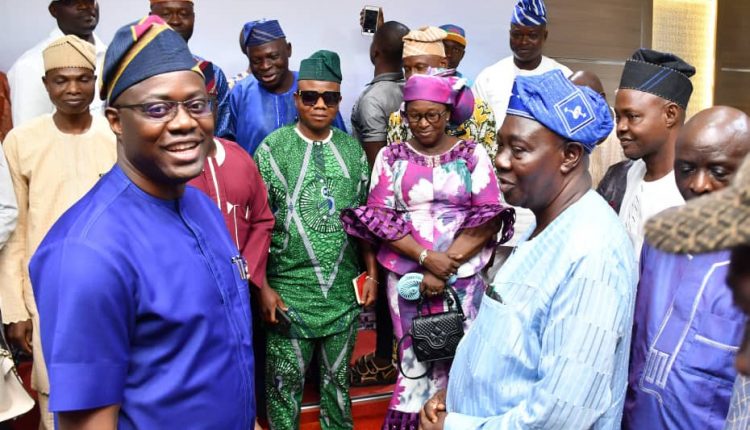 Oyo State Governor, ‘Seyi Makinde, on Tuesday, charged the new executive committe of Peoples Democratic Party (PDP) in the state to reconcile all aggrieved members and unify the party’s structure ahead of the 2023 general election.

He said: “I think by now, even the aggrieved members know where the party structure is. But we are not going to say they should go away as we also have to reach out to them. When the general populace pushed us to get ourselves organised that they will vote PDP, even some of our members did not believe it would work.
“We said something to ourselves that we may have a disagreement because there will always be disagreement in every human interaction. But what we are saying is that even if we have a disagreement, let us get ourselves together to get power and then those disagreements will go to the Government House where we will all settle it.

“And today, we are here in the Exco Chamber. Yes, we may not be able to satisfy everybody. Anytime we have challenges with anybody, let them bring those things to the table and we’ll fix it.

“We are lucky in Oyo State. Today, the Deputy National Chairman (South) of the party is from Oyo State. So, there is a channel to reach the very top decision-makers. “So, I want to promise you that everything we are supposed to work out to ensure that the party structure is well oiled and maintained, will be done.

“Everything that we have to do in terms of providing logistics and incentives will get to you. We are the ones at the state level but anything we are doing must get to the grassroots level because those are the people that will interface with the general populace.

“We are drinking from the PDP well and it is my prayer that others will also drink from the same well. So, that is why we must not pollute the well no matter how angry we may be. And I am sure that all the things each and every one of us is expecting will get to us.

“Another issue the chairman raised is about the party and government being on the same page because where we normally have the beginning of failure is when people are facing different directions unknowingly.

“As the leadership and administrator of the party in Oyo State, we must have the commitment to be fair and just to all the party members and even to those that claimed to be aggrieved. Once you bring them to the fold, deal with everybody as one. Let us try our best to do all we need to do and leave the rest for God.”
Earlier in his remarks, the newly elected state Chairman, Hon. Dayo Ogungbenro, appreciated the governor for hosting members of the new executive committee.
He, however, assured, on behalf of the new Exco, that he would make it a point of duty to instill discipline in the party and continue to support the current administration to succeed in all ways.