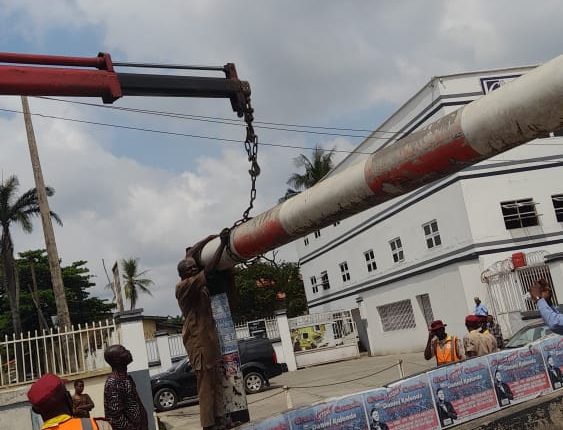 The Oyo State Government under the leadership of His Excellency, Governor Seyi Makinde has reopened the Mokola Flyover Bridge to traffic following a temporary closure experienced in the early hours of yesterday as a result of the partial collapse of the barricade atop the bridge.

This follows an expedited action and coordinated synergy between the Ministry of Public Works and Transport and the Oyo State Road Transport Management Authority (OYRTMA) in ensuring that normalcy returns to the area within the shortest possible time to ease the hardship faced by motorists whilst the repair work lasted.

Disclosing this at the scene yesterday night around 2200hours, few hours after the partial collapse, the Executive Chairman OYRTMA, Mogaji Akin Fagbemi PhD narrated that it took a coordinated action between the Ministry of Public Works and Transport and OYRTMA to fix the barricade within the shortest possible time.

In his words, “The Executive Governor, His Excellency, Governor Seyi Makinde has directed that MDAs synergise in real time to tackle issues that affects the good people of Oyo State. It is on that note that the Authority, having been informed of the collapse whose cause we are still investigating, swiftly called the attention of the Works and Transport department and of course, we were able to fix the barricade in a matter of hours and the bridge is now reopened for the unfettered use of the good people of the State.

As a government, our primary responsibility is to ensure the safety of lives and properties of our people. That explains why the temporary closure became imperative to forestall vehicles ramming into the collapsed barricade, destroying people’s properties and taking lives of innocent citizens.

As evidenced, the issue was resolved in far less than 24hours and the bridge is now reopened to traffic”, Dr. Fagbemi said.