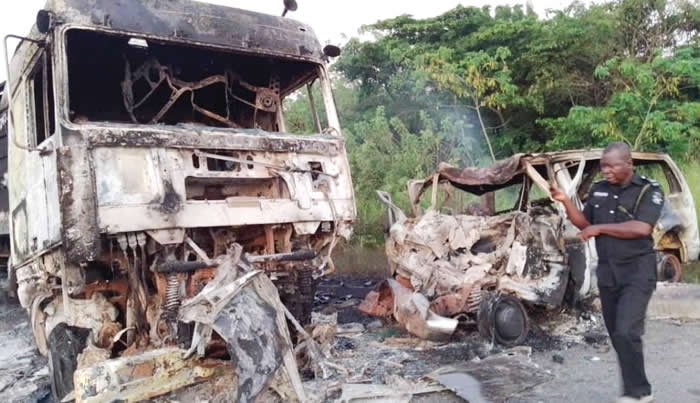 No fewer than seven people were burnt to death while three others sustained varying degrees of injury in an accident on the Lagos-Ibadan Expressway.

PUNCH Metro learnt that the accident occurred on Sunday night around Ogunmakin in the Obafemi-Owode Local Government Area of Ogun State.

The Public Education Officer of the Federal Road Safety Corps, Ogun State, Florence Okpe, confirmed the accident to journalists in Abeokuta on Monday.

Okpe explained that the crash involved two vehicles with no number plates on them.

According to her, 10 persons were involved in the accident; three were injured, while the seven were burnt beyond recognition.

She said, “The suspected cause of the crash was route violation (one way). The two vehicles had a head-on collision due to one-way driving, which resulted in a fire incident.

“The injured victims were taken to the Victory Hospital, Ogere, for medical attention.”