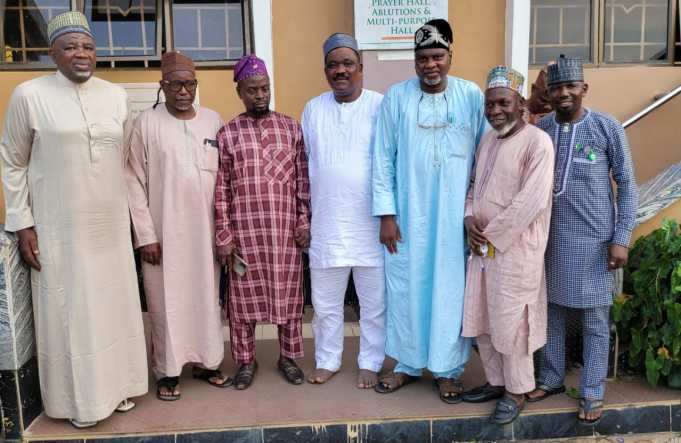 The Niqab crisis rocking the Ladoke Akintola University of Technology, LAUTECH, may have been laid to rest as the Muslim Community of Oyo State, MUSCOYS, has waded in.

At a reconciliation meeting convened yesterday by the association, the parties involved were reconciled. This was after Prof Ajibade Bayo Lawal apologized to Surveyor Badmus Yinusa, the husband of Sister Shukurat Ayanbisi Jamiu. This was just as the surveyor agreed to withdraw his case from court.

Recalls that Lawal, who is dean of the faculty of nursing had ordered the niqab-wearing out of the class.

The immediate responsive physical action taken by the Muslim Students’ Society of Nigeria (MSSN) of LAUTECH to register its displeasure and seek redress is commended.

It is very disheartening that the sister was humiliated in the full glare of other students, to the sad extent that that she was weeping profusely, as an effect of the psychological trauma that was inflicted on her. Quite unfortunately, the evil was perpetrated by a Muslim Professor, who is expected and supposed to understand and be in the vanguard for the sanctity of wearing of Niqab by adult female Muslims, in obeisance to the tenets of Islam.

Entreaties were made to us on the fact that:
i. the Professor in question is a Muslim;

iii. LAUTECH Management should forthwith stop harassment of Muslim students, male and female, simply because they appear as
Muslims;

iv. we should find a way of amicable settlement of the issue, without undermining the rights of Muslims, male
(because we hear that Muslim males are also harassed because of their beards) and
female, in LAUTECH.

The Muslim Community of Oyo State constituted a panel, to look into the matter,with the following as members:

Those who spend (benevolently) in ease as well as in straitness, and those who restrain (their) anger and pardon men; and Allah loves the doers of good (to others) and also, the Hadith of the Prophet (ﷺ): which says:

At the meeting, which had the Professor’s team, the team of Surveyor Prince Badmus Yinusa, the sister’s husband and the leadership of the Muslim Community of Oyo State, the following steps were taken:

i. Professor Ajibade Bayo Lawal was reprimanded for disparaging Islam;

ii. He, (Professor Ajibade Bayo Lawal) having realised his mistake, showed deep emotions. He WEPT BITTERLY to show remorse and TENDERED PROFUSE APOLOGY to the sister and the entire Muslim Ummah;

iii. He (Professor Bayo Lawal) also pleaded with Surveyor Badmus Yinusa, the husband of the sister, who had earlier concluded to withdraw his wife from the Nursing programme, not to let his wife withdraw from the program;

iv. the husband of the sister, Surveyor Prince Badmus Yinusa, spoke to accept the apology and appealed to the entire Muslim Ummah, to also accept the apology in the spirit of the earlier quoted exhortations from the Qur’an and Hadith. In fact, he could not help but allow his tears to flow, from his love for, and fear of Allah;

v. the husband of the sister, who had earlier decided to withdraw his wife from the programme, accepted to let her continue;

vi. the husband also agreed to withdraw the petition earlier written by the lawyers of Sister Shukurat Ayanbisi Jamiu;

vii. the Management of LAUTECH should note that, now or in the future, the sister, and others like her, should never be made to suffer any backlash from the incident that happened on Wednesday, 17th November, 2021.

vii. the Management of LAUTECH is also urged to give effect to the University manual, which allows students to wear hijab and niqab (face veil), without any further hindrance. Abuse and harassment of male students who have beards should also stop forthwith;

APPRECIATION
The leadership of the Muslim Community of Oyo State appreciates all Muslim groups and personalities, who continue to resist oppression of Muslims and Islam, in any form.
Jazaakumullahu Khayran

We also appreciate Surveyor (Prince) Badmus Yinusa, the husband of Sister Shukurat Ayanbisi Jamiu, who displayed modesty and love for Allah (swt) and His Prophet (ﷺ) by allowing the leadership of the Muslim Ummah in the State to mediate in this matter. May Almighty Allah reward you abundantly, here and in the hereafter.

We hereby express appreciation to all Muslim groups, organisations and various interest groups who have shown concern in this matter and urge them all to please accept these resolutions we have reached, in the interest of peace and Muslim Brotherhood. May Allah (swt) reward our individual and collective efforts in the cause of Islam

In conclusion, we warn all establishments and institutions to put a permanent stop to all anti-Islam and anti-Muslim policies and actions, in the interest of peace in Oyo State.